Constructed of timber, York Castle was built in 1068 by William the Conqueror to control northern England. It was located in the city of York in North Yorkshire England near the castle called Old Baile, which existed across the River Ouse. However, both were burnt to the ground in 1069 by the Danish and English Northerners who opposed William's rule. Today, only earthworks of the second castle, Old Baile, remain. 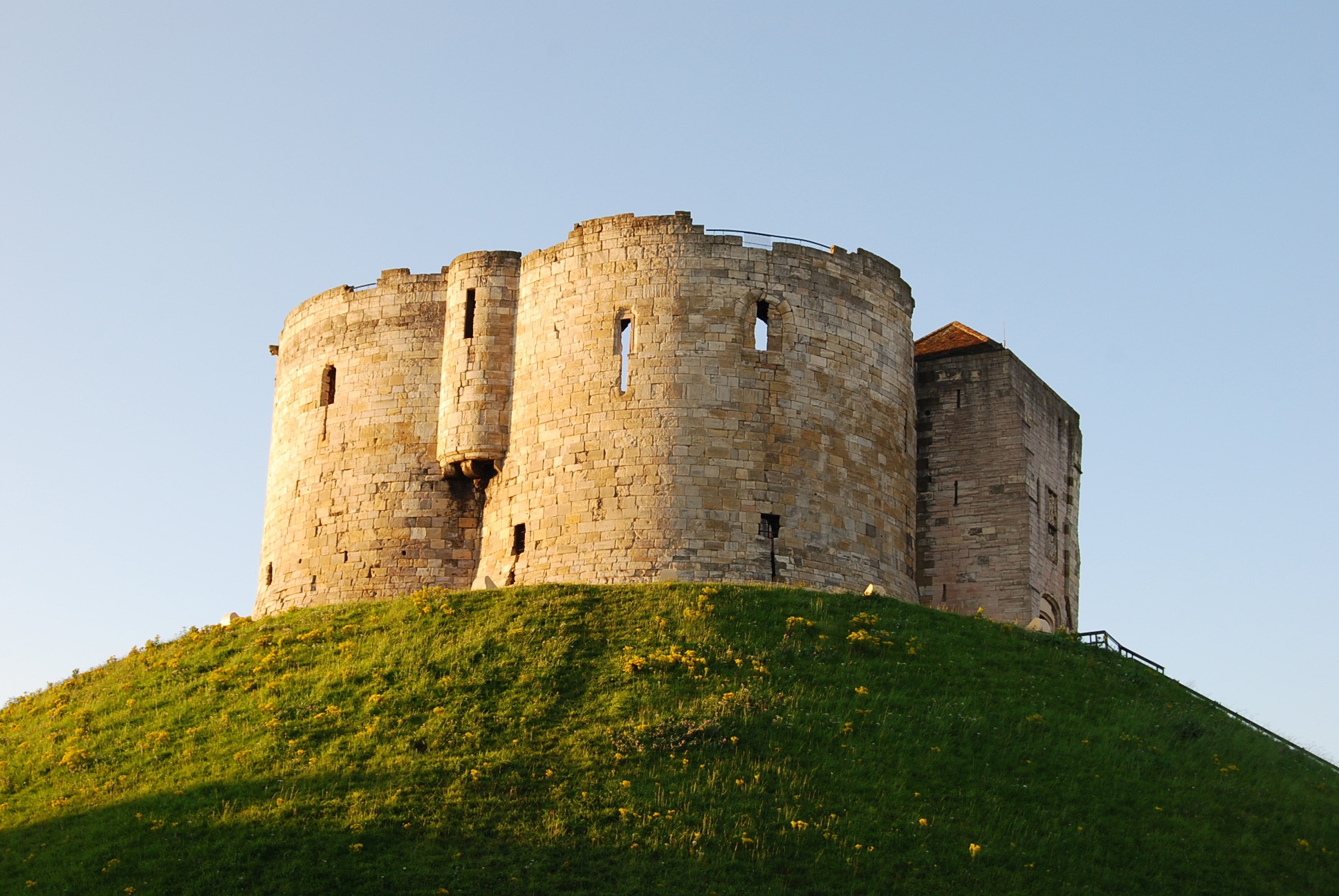 William paid the Danes to leave England and wanted to face the Northern English in battle but none would face him. As a result, he burnt cities, towns and fields to the ground across the north, particularly in Yorkshire and City of York as a warning concerning any potential future rebellions. This became known as the Harrying of the North. In 1069 and 1070, York Castle was rebuilt in timber and enhanced to include water defenses including a moat.

King Henry II temporarily visited at York on several occasions and, in 1175, received recognition from King William of Scotland while in York. In March 1190, 150 Jews sought refuge within the keep of York Castle from a rioting mob. Surrounded and trapped within the castle, the Jews took their own lives rather than surrender to the rioters. The timber keep was once again burnt to the ground.

Approximately half a century later in 1244, King Henry III arranged for rebuilding of York Castle by Master Henry the Mason. The structure was composed of stone in order to bring it up to standards of the time. Efforts included construction of the unique quatrefoil shaped keep that remains today. Moreover, stone walls replaced timber ones surrounding the outer bailey similar to many Norman motte and bailey castles of the period.

King Edward I spent a great deal of time at York Castle, which served as his staging point for aggressions with Scotland in the north. Between 1298 and 1338, royal administrative duties were frequently relocated from London to York Castle. In 1308, 25 Knights Templar were held prisoner at York Castle while awaiting trial in nearby York Minster regarding chargers of heresy. In 1310, they were found innocent, however, the order was stripped of its possessions and disbanded. This represented a much less violent outcome than those Templars burned at the stake in France.

By the end of the 14th century, York Castle was primarily utilized as a prison, holding up to 310 prisoners in its towers at any given time. In 1536, Robert Aske was imprisoned at York Castle and executed there upon order of King Henry VIII following Aske’s protests against Dissolution of the Monasteries, known as the Pilgrimage of Grace. Towards the end of the 16th century, the Clifford family comprising the Earls of Cumberland, became constables of the castle. At this time, the keep became known as Clifford’s Tower.

In July 1644, the city of York including York Castle surrendered to Parliamentarian forces after Royalists were defeated the day before at the Battle of Marston Moor just five miles from York. This would be the last conflict involving the castle. Approximately a century later in 1739, John Palmer was arrested for horse theft and held prisoner at York Castle. Following a letter he wrote to his brother-in-law, a former school teacher recognized the handwriting and identified him as none other than the infamous highwayman Dick Turpin. Thereafter, Turpin was found guilty and sentenced to death by hanging.

By the 19th century, Clifford’s Tower was all that remained of York Castle as the mills and prisons were no longer needed. The prison portion of the outer bailey closed in 1929 and several prison buildings demolished in 1935 with the exception of those designated to incarcerate women and debtors.

Today, only a small section of a rampart wall, corner tower and fragments of the south gatehouse behind the Crown Court building comprising Clifford's Tower high atop its earthen motte remain from original medieval York Castle. Currently, the structure resides under the care of English Heritage, which manages more than 400 historic monuments, buildings and places.

The most significant feature of York Castle is undoubtedly the keep referenced as Clifford’s Tower. In fact most people in the north call the castle Clifford’s Tower these days rather than York Castle. The keep is unique given quatrefoil shaped shell consisting of four overlapping circles similar to the shape of a four leaf clover. There is a small gatehouse at the entrance of the keep that houses a chapel above the gatehouse.

Although the keep no longer has a roof, it is still possible to attain breathtaking views of York from the top of its remnants or alternatively York Minster across town. The buildings in front of the keep entrance were once used as prisons within the old castle walls but today serve as the Crown Court building and Castle Museum. Behind the Court House exists a small section of the outer bailey wall and small corner tower that avoided destruction when remainder of the outer bailey was removed during the early 20th century. York Castle can be thoroughly explored in approximately an hour. For convenience, a car park is located next to the castle. York Castle is an easy walk from the York train station.

The city of York surrounding the castle is well worth a visit. Highlights include cobble stone streets, Viking and Roman history, as well as York Minster. For spine-chilling fun, I recommend the Ghost Hunt of York which begins at Shambles every night at 7:30 PM.

The castles of Knaresborough, Spofforth and Ripley are located within 50 miles of York to the east towards Harrogate.

The story of the bleeding walls of Clifford's Tower.