Burg Sooneck was constructed as early as the 11th century and takes its name from nearby Soon Forest. It was built, along with Burg Reichenstein, Burg Heimburg and Burg Vauzburg for the purpose of protecting the area around Niederheimbach, which was owned by the abbey of Cornelimunster. 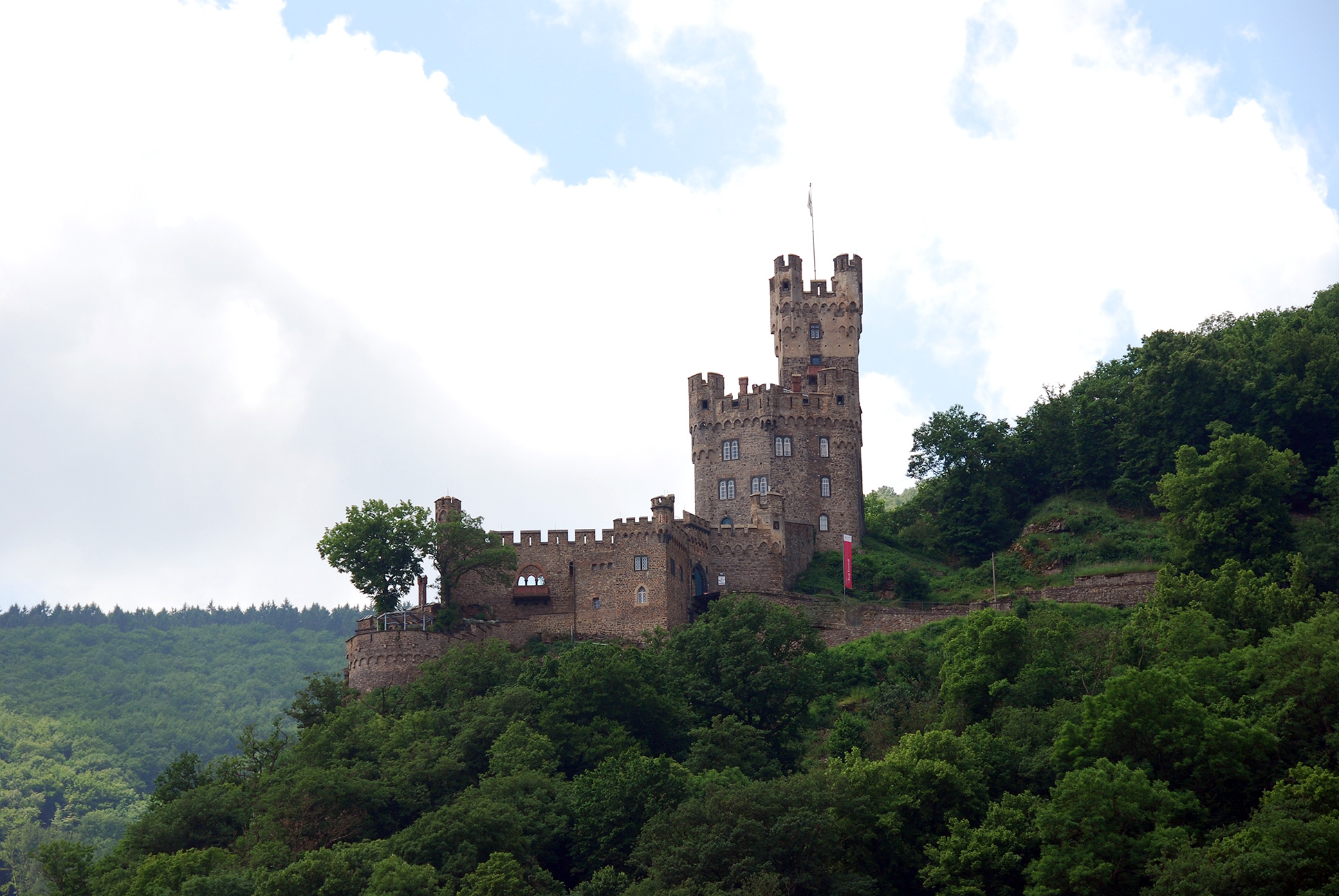 In 1254, Burg Sooneck and Burg Reichenstein castles were both besieged by the League of Rhenish Towns in order to end attacks by robber knights who enriched their own coffers with tolls and taxes collected on the Rhine. After the territory around Niederheimbach was purchased in 1270, peace was restored between the Archbishop of Mainz and Phillip von Hohenfels. However, unrest would return upon violation of the treaty by Phillip’s son, Dietrich von Hohenfels. As a result both castles were destroyed in 1282.

In 1346, the Elector Heinrich III of Mainz granted the knight Johann, Marshall of Waldeck, with Burg Sooneck, Burg Reichenstein and Burg Heimburg. After prohibition of construction was withdrawn by Emperor Charles IV in 1349, Burg Sooneck was rebuilt with its corner turrets of the Keep and Great Hall representative of the style during the middle of the 14th century. In 1688, Burg Sooneck was once again destroyed, this time by French troops of King Louis XIV, during the War of the League of Augsburg.

In 1774, ruins of the castle were granted to residents of the town of Trechtinghausen who established vineyards both inside and outside the castle grounds. In 1823, ruins were purchased by a member of the Prussian royal family. In 1842, restoration of Burg Sooneck castle began. It represented the third Rhine castle to undergo rebuilding by the Prussian royal family, following Burg Rheinstein and Schloss Stolzenfels, which were reconstructed for the purpose of becoming more grandiose and romantic. In contrast, efforts regarding Sooneck simply concentrated on restoration of the castle to a functional state, in addition to utilization as a royal hunting lodge.

Apart from King William visiting the castle in 1863 and 1875, it was never used as a hunting lodge as originally intended by the royal family. Eventually, the castle passed to state ownership in 1918. Nearly three decades later after World War II, Burg Sooneck was placed under the control of the Administration of the Castles of the State of Rheinland-Palatinate who still manage upkeep of the castle to this day..

Burg Sooneck resides as one of many castles along the Rhine River between Mainz and Coblenz Germany. The best views may be seen from the river itself while taking a cruise along that stretch of the Rhine. Typically, cruise boats stop approximately every 30 minutes at various points along the river.

When traveling by vehicle to visit Burg Sooneck, the hill towards the castle is accessible via the B9. A car park area exists on the right just after passing the town of Niederheimbach along Soonecker Str. After a short walk from the car park along the road, the castle will come into view. Thereafter, you will enter by walking over the drawbridge and through the main gate. Tickets to walk the castle grounds, as well as guided tour may be purchased through the door on the left. While tours are provided in German, handouts in English and other languages are available to describe rooms visited during the tour.

Burg Sooneck was restored to a simple yet romantic plan and has lots of colorful roses growing along its ramparts. As the Keep is rather large, it is best to view it from a distance at outer areas of the castle. The Knights Hall contains a large neo-gothic fireplace, in addition to furniture from Schloss Stolzenfels. The room is adorned with a picture of a Prussian soldier, perhaps someone from the Prussian royal family. The interesting part about the picture is that no matter where you stand in the room, the eye of the soldier eerily follows you.

The dining room contains a large painting by Fritz Schutz, which depicts the Battle of Koniggratz. The dining table and chairs are from the mid-nineteenth century. The King’s Study includes a fashionably elegant roll top desk. It is possible to visit Burg Sooneck in only a few hours. Consequently, it is possible to visit nearby castles of Burg Reichenstein or Burg Rheinstein, which are both located along the B9 heading east towards Bingen during the same day.

Burg Sooneck has a legend.

Open to the Public
9am - 6pm; April - October
9am - 5pm; November - March
Closed:
December and on the first working day each week