Caernarfon Castle is situated on the banks of the River Seiont and southern end of the Menai Strait. The site served as a strategic location in northwest Wales prior to construction of the castle in approximately 1090 by the Earl of Chester, Hugh D’Avranches, for the Roman fort of Segontium built centuries before resides nearby. The castle, which represents one of the most impressive in Wales, featured traditional Norman motte and bailey style architecture consisting of earthen banks and wooden palisade walls. 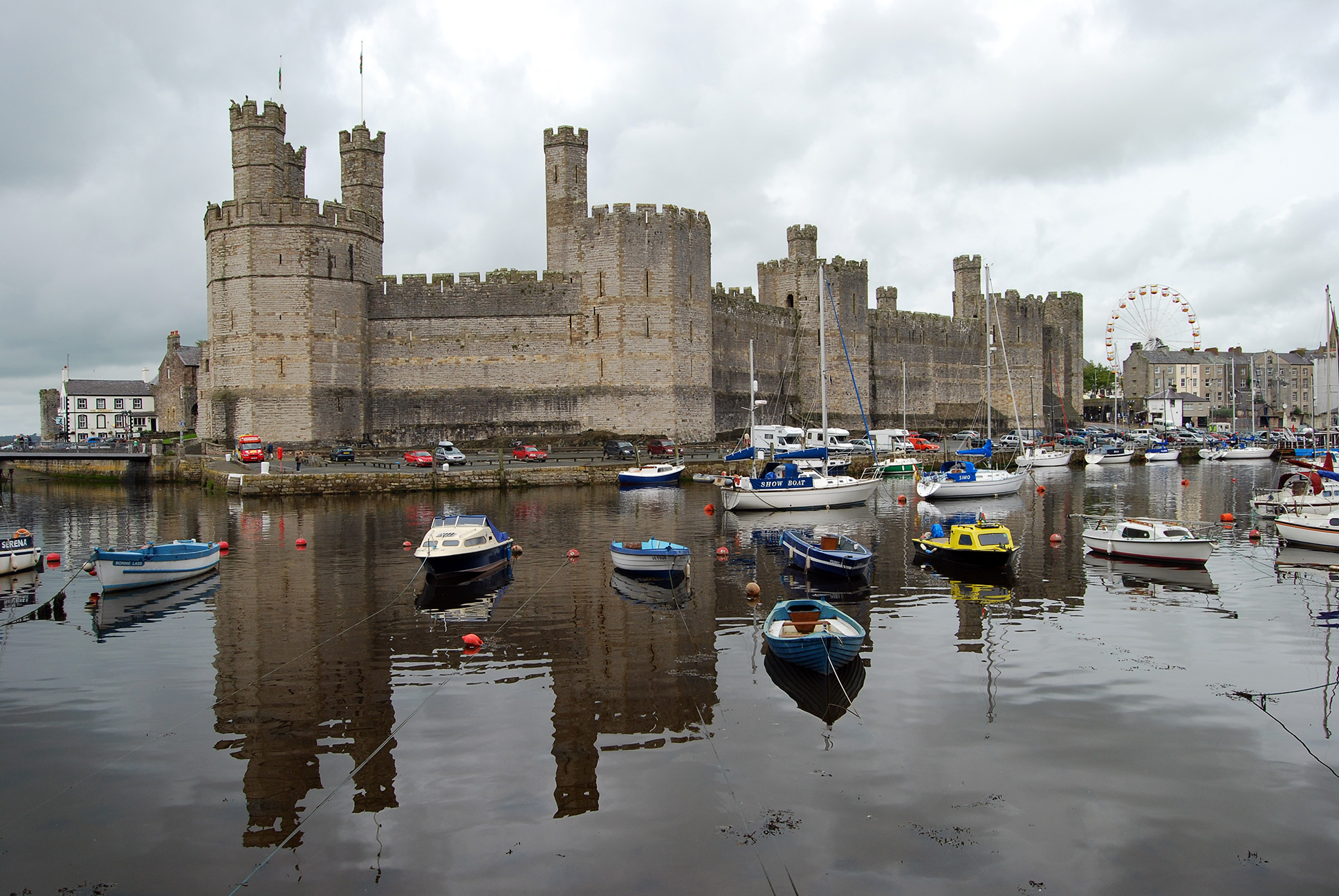 In 1283, during the Second War of Welsh Independence, King Edward I of England began construction of the current Caernarfon Castle, as well as nearby Conwy Castle and Harlech Castle, in an effort to control Northern Wales. The motte of the Norman style castle was incorporated into the Edwardian Castle that constitutes the upper ward of Caernarfon Castle today. Due to its location along the banks of the River Seiont, building material and stone could be easily transported by boat to the construction site. Architectural design and construction of Caernarfon Castle were handled by the king’s master mason, James of Saint George, who worked on other castles in Wales. Foundations for the towers began and stone curtain walls rose to a height of 12 meters.

In 1294, a Welsh rebellion, led by Madog ap Llywelyn, attacked the castle and town of Caernarfon, overrunning defenders and setting fire to everything combustible within the castle. However, the English regained control of the castle and town by the following summer and rebuilt defenses by November of 1295. Thereafter, repairs to the castle were performed, in addition to major construction activities necessary to complete previously unfinished work. According to legend, Edward promised the Welsh population he would name "a prince born in Wales, who did not speak a word of English." To their surprise, an infant son of the king was born in 1284. Later known as Edward of Caernarfon, his son became the Prince of Wales in 1301, thereby, fulfilling King Edward's prophecy.

In 1317, the massive Eagle Tower of Caernarfon Castle was nearly complete with a carved stone eagle affixed to the top of one of the tower turrets. Most construction on the castle, which remains visible today was completed by 1330. The castle would serve as Edward’s administrative center for managing lands grouped in the new shires of Caernarvon. When Henry Tudor came to the English throne in 1485, his Welsh lineage softened pre-existing hostilities between the English and Welsh. As a result, the likelihood of conflict, and consequently, need for structural defenses were greatly reduced. Thereafter, the great Edwardian castles of Wales began to fall into neglect and ruin. By 1620, the Eagle Tower and the King’s Gate remained the only portions of Caernarfon Castle still roofed.

During the English Civil War from 1642 to 1648, the castle was besieged three times however, its outer walls remained intact. In 1660, the government gave an order to dismantle and demolish the castle, addition to town walls. As the order went unfulfilled, the castle and town walls were never demolished, and thus, still marveled to this day. In 1969, the investiture of Charles, Prince of Wales, occurred at Caernarfon Castle. Prince Charles is the 21st holder of the title which began in 1301 when Edward I formally created his son Prince of Wales. The title is intended for the male heir apparent to the throne, but is an appointment, rather than a birthright. In fact every male heir to the British throne has been given the title since 1301.

Unlike other Edwardian castles in Wales, Caernarfon Castle is adorned with multi-angular towers and broad bands of different colored stone said to resemble one of the best-known monuments of imperial Rome, the city walls of Constantinople. Therefore, it is presumed Edward I planned for Caernarfon Castle to serve as his seat of power in Wales dating back to its construction. The most impressive part of the castle is its massive Eagle Tower, which contains five apartments on each of the three floors above the basement chamber. The roof of the Eagle Tower includes three smaller turrets. A multimedia exhibit within the Eagle Tower provides an informative presentation regarding history of the castle.

The King’s Gate serves as the current entrance to Caernarfon Castle. If original construction plans were completed as intended, the structure would have included a drawbridge, five sets of wooden doors, six portcullises, as well as array of murder holes and arrow slits. The Granary Tower contains multiple groupings of arrow slits that enabled an archer to defend three sides of the tower from a single location. The angles of the walls and slits on the interior gave maximum range for shooting while still protecting archers from enemy crossfire outside the castle.

If possible, highly recommend visiting Caernarfon Castle during high tide and walking across the bridge spanning the River Seiont. The views of the castle with its walls reflecting in the river are spectacular. While still a nice view at low tide, reflections of a muddy riverbed will be seen instead. It should not take a whole day to visit Caernarfon Castle unless you include the walled town. Conwy Castle is not far to the east and makes a good companion visit during the same day.