In April of 1295, Edward I of England began construction of Beaumaris Castle in Northern Wales on the island of Anglesey near the coast of Conwy Bay. In order to build the last of his iron ring of castles, he appointed Master James of St. George who assisted with many other Edwardian castles in North Wales to oversee the effort. 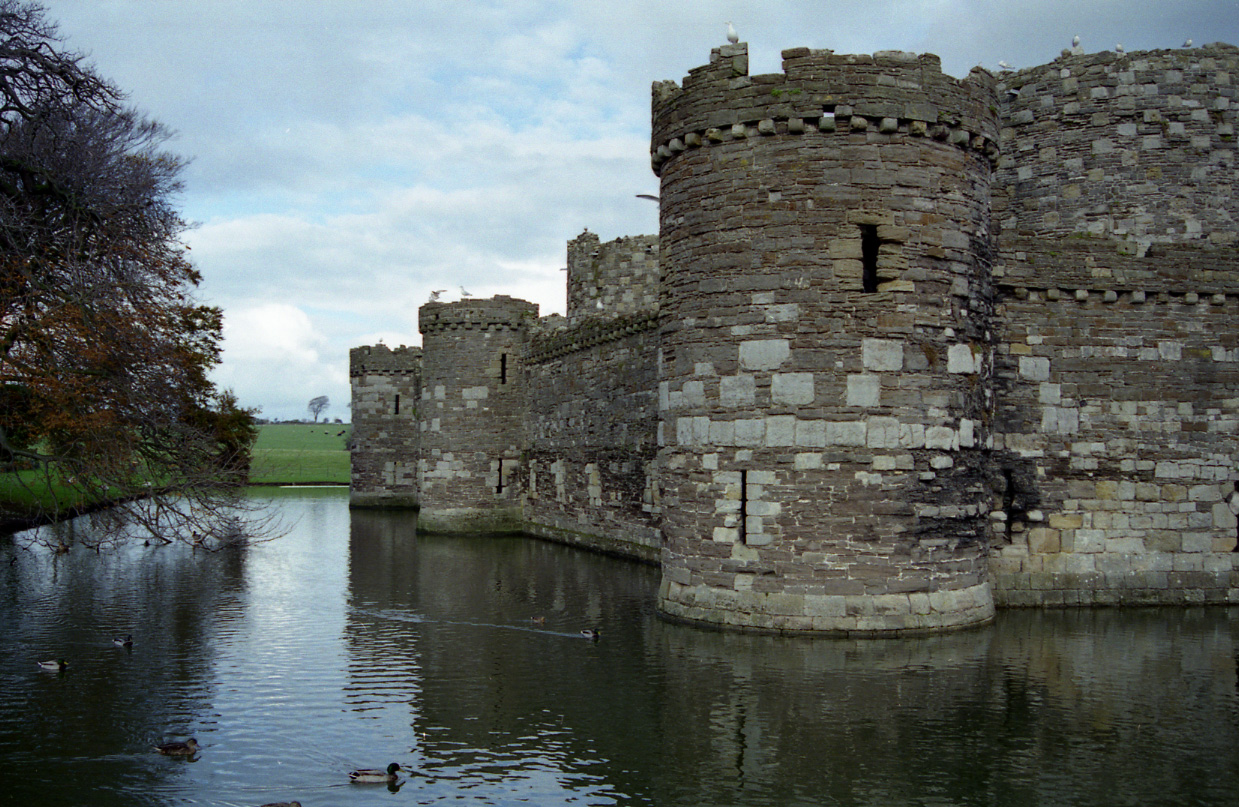 Although building activities spanned nearly four decades, Beaumaris Castle was never completed as funding required diversion towards Edward I’s wars with Scotland. When building ceased in the 1330s, the great towers of the inner ward were still missing their top stories and some turrets never begun. Consequently, the castle is visually less impressive than Harlech and Conwy since it does not dominate the surrounding countryside. Despite never completing construction, Beaumaris Castle contains some history. The castle was besieged by the Welsh in 1403 during a revolt led by Owain Glyndwr against English rule. However, it was retaken by the English only a couple of years later in 1405.

Nearly two and a half centuries later during the English Civil War, Beaumaris Castle served as a strategic location since it controlled part of the route between Ireland and king’s headquarters in England. The castle was managed on behalf of the king by the Bulkeley family. In 1646, parliamentarians defeated royalist armies and castle surrendered by Colonel Richard Bulkeley in June of the same year. Royalists revolted against parliament once again in 1648 but eventually surrendered a second time in October of that year. Beaumaris Castle was not slighted or damaged as was the fate of many castles captured by parliamentarians under Oliver Cromwell. Given the need for protection against potential royalist invasions from Scotland, architectural defenses were crucial for survival.

When Charles II returned to the throne in 1660, he restored the Bulkeley family as constables for Beaumaris Castle. By this time, the castle had already been stripped of its valuable resources including lead based roofs. Thereafter, Beaumaris Castle fell into a state of neglect, eventually becoming dilapidated and overgrown with ivy. In 1925, Richard Williams-Bulkeley gave the castle to Commission of Works who performed restoration work including the removal of vegetation, stonework repair and excavation of the moat. Today, Beaumaris Castle is managed by Cadw, the Welsh Assembly Government’s agency for historic monuments.

Beaumaris Castle remains in a partially built state much the same as during the 1330s, thus providing great insight to the castle building process and considered by historians as “the most perfect example of symmetrical concentric castle planning.” In a similar manner, its architecture was praised by the United Nations Educational, Scientific and Cultural Organization (UNESCO) as one of the finest examples of late 13th century early 14th century military architecture in Europe.

The design of Beaumaris Castle represents a concentric architecture comparable to both Rhuddlan and Harlech. Concentric castles rely on two concentric rings of walls and towers to provide added security and multiple layers of defense. This includes an inner courtyard surrounded by a high curtain wall enclosed by a shorter wall and both encircled by a moat. The inner ward consists of two massive gatehouses on northern and southern portions of the castle, which represent largest parts of the structure. Aside from the gatehouses, the inner ward contains six towers.

The outer ward is octagonal sided with twelve smaller towers along the walls and gatehouse referenced as the “gate next to the sea,” which previously contained a drawbridge over the moat, as well as portcullis. In addition, the Chapel Tower includes an exhibit entitled The Castles of King Edward I. Beaumaris Castle, though not a towering nor foreboding castle due to incomplete height of its towers, still represents an impressive and picturesque site with its dark stone and water filled moat surrounding the outside of most of the castle. Moreover, there is no central keep as found with Norman motte and bailey style castles.

Beaumaris Castle can be explored in about two to four hours, leaving ample time to also visit nearby Conwy Castle to the east or Caernarfon Castle to the west.