Bunratty Castle resides along the confluence of the Shannon estuary and Owenogarney River, which was once known as the Raithe River. The castle eventually received its name from the Irish, Caisleán Bhun Raithe, which translates to "Castle at the Mouth of the Ratty." 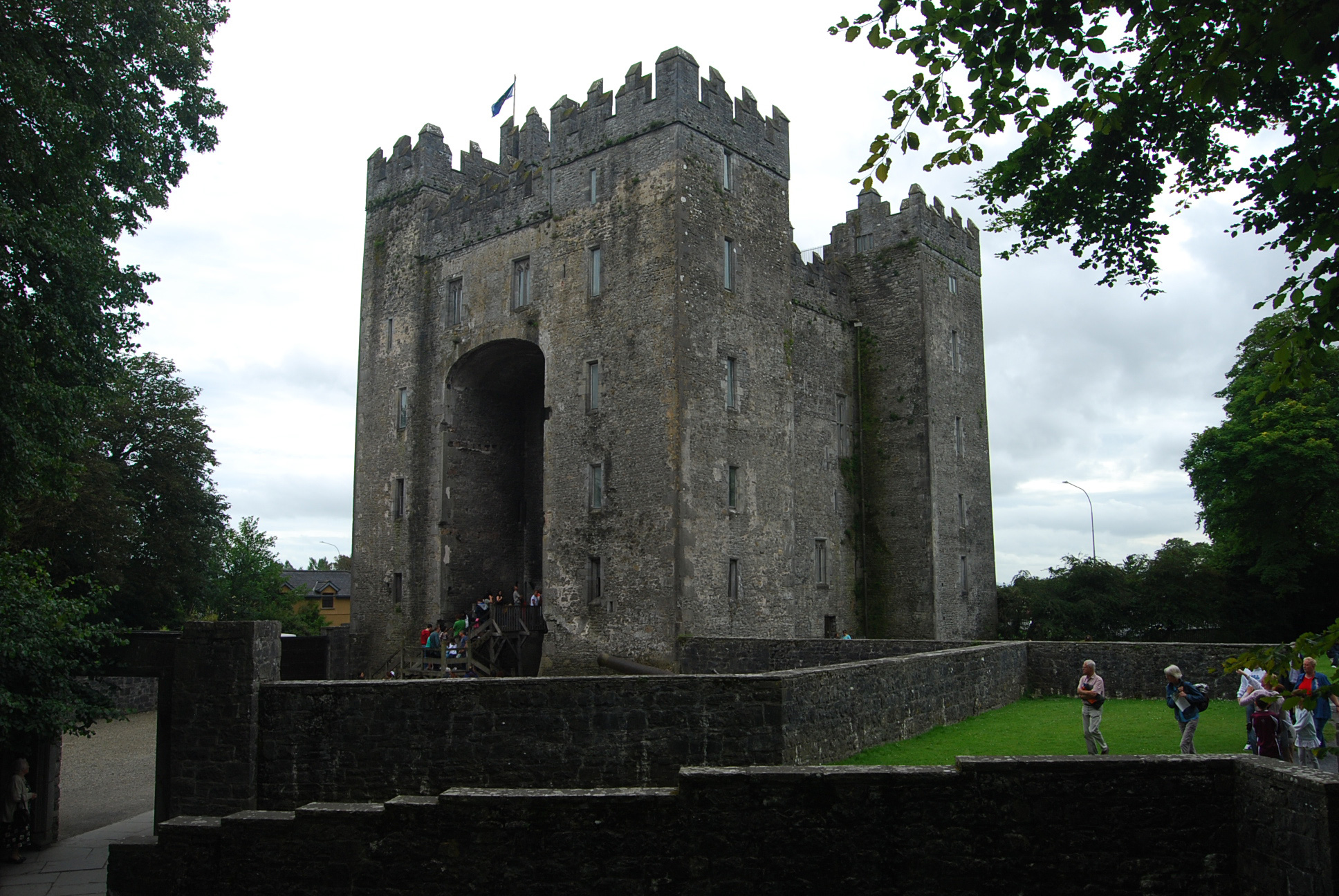 The current structure representing Bunratty Castle was built by the MacNamaras around the year 1425. Architecturally, it was constructed in rectangular tower house style. Approximately, half a century later, ownership reverted to the O’Briens who represented the largest clan in North Munster. The castle and surrounding area prospered under the O’Briens who were granted the title 'Earls of Thomond' by King Henry VIII of England. However, Bunratty Castle was eventually surrendered when their reign ended upon the arrival of Cromwellian troops. Thereafter, the O'Briens relocated to Dromoland Castle.

Over time, various Irish families took residence at the castle until the Studdert family took residence in 1720 after acquiring it. They remained there for approximately a century before the castle fell into disrepair and ruin. In 1945, the ruins were purchased by Lord Gort, seventh Viscount Gort, who restored the castle to its current condition. Contents within the castle include 16th century style furnishings from Lord Gort and his wife. Today, Bunratty Castle represents one of the finest castles in Ireland.

While the current state of Bunratty Castle was constructed during the 15th century, it was actually the fourth castle built on or near its current location. The first castle was built in 1250 when the lands were granted by King Henry III to Robert De Muscegro who built a traditional motte and bailey Norman style structure consisting of a strong wooden tower atop an earthen motte. Eventually, the lands were were revoked by King Henry II and granted to Thomas De Clare who built the first stone castle on the site. In 1318, Thomas, as well as his son, Richard De Clare, were killed by Irish forces at the Battle of Dysert O’DeClare. After hearing the news, De Clare’s wife set fire to the castle and town before setting sail for England. Upon arrival of the Irish to Bunratty Castle after the battle, the devastation encountered may best be characterized by a chronicler at the time who described it as “deserted, empty, wrapped in fire, from which time to this never one of the breed of De Clare has come back to claim it.”

Bunratty Castle was constructed as a traditional Irish rectangular tower house consisting of three main floors and turrets at each corner. The turrets and outer wall areas surrounding the main central rooms contain smaller bedrooms, kitchens and private chapel and a dungeon. The most impressive room in the castle, the Great Hall, is located on the top floor. It served as a banquet hall and audience chamber for the Earls of Thomond. Various decorative tapestries hang from walls of the hall. Moreover, large windows and high plastered walls provide a bright and airy ambiance to the room. The floor below the Great Hall contains the Main Guard. This areas served as the general living and dining area for soldiers and retainers. Even within this shared space, status and precedence were extremely important as a demarcation line on the floor divided the room between officers and general soldiers, in addition to castle workers.

Bunratty Castle is conveniently located just a few miles from the Shannon Airport. The castle grounds include a folk park where visitors can experience Irish life more than a century ago by visiting farmhouses, shops, pubs and thatched roofed houses. But the biggest tourist attraction is the castle itself. A visit to Bunratty Castle would not be complete unless you partake in one of the medieval banquet dinners hosted after the castle closes for daytime visitors. For those with a reservation, guests gather in the Great Hall to listen to musicians playing a harp and violin while enjoying a beverage prior to enjoying a three course mail within the Main Guard. During dinner, Irish singers entertain the crowd by singing traditional Irish songs. Upon exiting in the dark, you will notice the castle in all its majesty illuminated by flood lights.

Sign posted off the N18 Limerick/Ennis Road near Shannon.