Pevensey Castle resides in East Sussex England along the southern coast. Its strategic location near Pevensey Bay accounts for the reason a fortification existed here since approximately 290 AD when Romans built the fort of Anderida. After Roman retreat, the fort walls continued to provide protection until minimally the late 5th century. 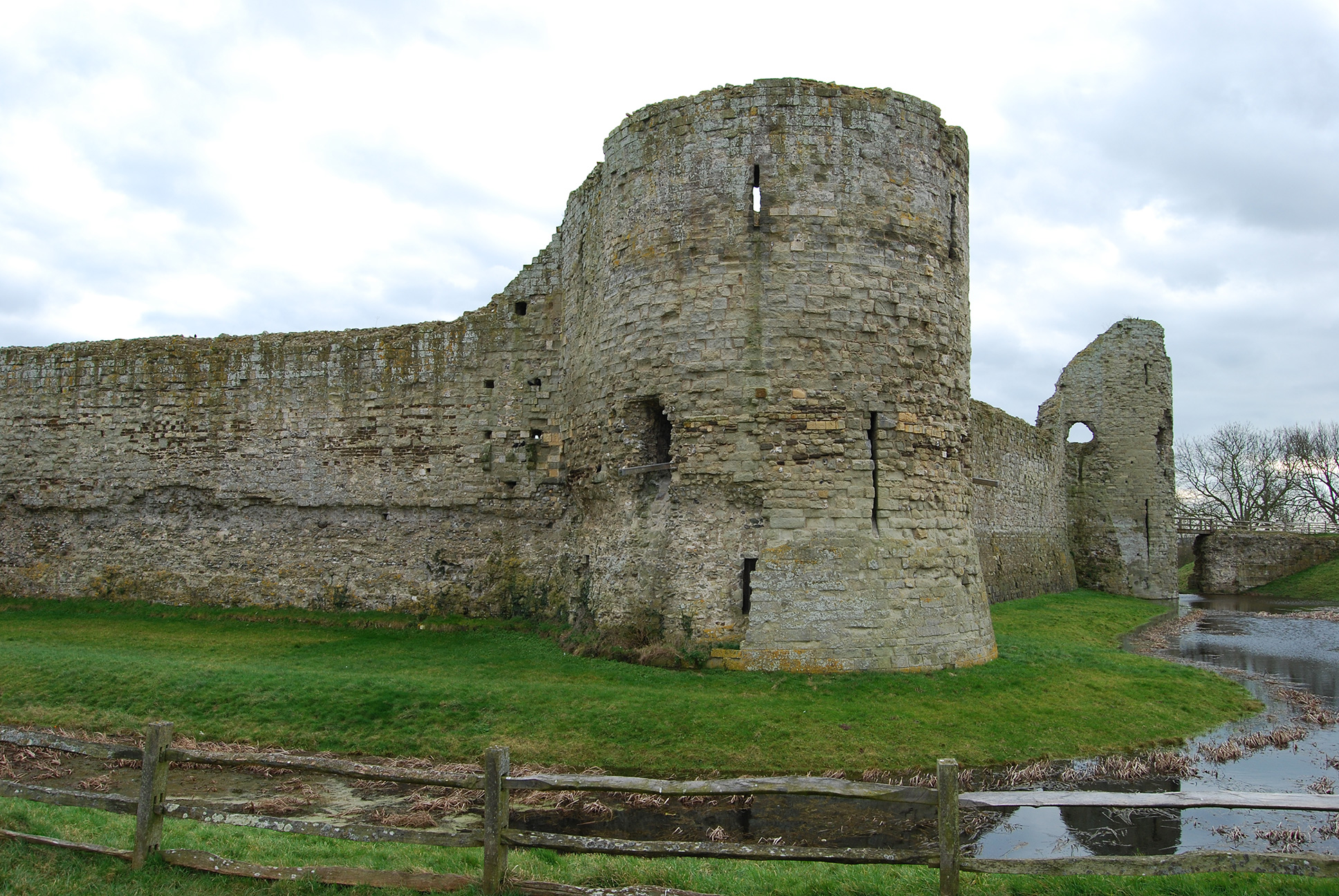 In 1066, William the Conqueror set sail from France to challenge Harold Godwinson for the Crown of England. Inside his Viking long boats, William brought with him knights, horses and wood to erect wooden palisade walls for protection. William and his army landed at Pevensey Bay and quickly established a wooden castle within the old Roman stone ruins of Anderida, as well as refortified ruined walls of the fort. Two weeks later they marched to nearby Hastings and constructed a second wooden castle. After defeating Harold at the Battle of Hastings, William began building wooden motte and bailey castles throughout England to control the country, thus beginning the castle era.

In 1067, William granted Pevensey Castle to his trusted half-brother Robert, Count of Mortain. who was probably the first to build permanent medieval defenses at Pevensey. With Roman ruins serving as outer walls, the inner courtyard was divided into an inner and outer bailey separated by a ditch and wooden palisade. The inner bailey contained the medieval gatehouse, keep and chapel while outer bailey encompassed more domestic buildings including a granary. After William’s death in 1087, contention over Pevensey Castle ensured between his sons, Duke Robert of Normandy and William Rufus, who served as heirs. Fearful, Duke Robert would attempt to attain control over the castle with his uncle's support, William Rufus launched a siege by land and sea to forcibly take control of it. The structure withstood six weeks of attack before a truce was declared after a shortage of food broke the will of castle defenders.

For the next approximately 150 years, Pevensey Castle changed ownership through various royal favorites until 1246 when it was granted to Peter of Savoy who replaced its wooden palisades with stone walls and towers, which still stand today. Within 10 years of their construction, the walls were tested during baronial disturbances of Henry III’s reign. On the 15th of May 1264, an army led by Simon de Montfort defeated the king’s forces at the Battle of Lewes. In the aftermath, royalist constable of Pevensey was ordered to surrender Pevensey Castle. Upon his refusal, it was besieged. However, the castle successfully withstood attack for several months before combat eventually ended due to its ongoing expense. After Peter of Savoy’s death in 1268, Pevensey Castle passed to Henry III’s queen, Eleanor of Provence, where it remained crown property for roughly 100 years.

In 1394, John of Gaunt appointed Sir John Pelham to serve as constable of Pevensey Castle. Five years later, Pelham departed the castle to support Henry of Bolingbroke when he usurped the English Crown from Richard II in 1399. During Pelham's absence, the castle was besieged by locals. His wife, Joan, wrote a letter to Pelham regarding her circumstances inside the castle during the siege.

My Dear Lord it is right that you know of my position, I am here laid in manner of a siege … so that I may not out, nor no vitals get without much difficulty. Wherefore my dear may it please you, by the advice of your wise council, to give remedy to the salvation of your castle and the malice of your enemies. The Holy Trinity keep you from enemies and soon send me good tidings of you.

When Bolingbroke was crowned King Henry IV, Pelham received the castle and Honour of Pevensey in reward for his services to the king. However, the castle eventually fell into ruin during the Tudor dynasty according to survey records of 1573. The threat of a Spanish Armada in 1588 required construction of a gun emplacement at the castle, which consisted of two cannons. One still survives today within the inner bailey of the castle.

After the fall of France in World War II in 1940, Pevensey again became a potential location for invading England from the south. Consequently, a command and observation post were created within the castle, perimeter defenses refortified with modern machine gun pill boxes, as well as addition of blockhouse for anti-tank weapons at the Roman West Gate. Moreover, the castle was refitted to serve as barracks for a garrison during the war. The machine gun pill boxes within the medieval castle walls were left intact to serve as a reminder of the castle's history.

After entering Roman walls via Roman East Gate, the medieval castle and its inner bailey are visible to the left. It’s a stone castle ruin similar to abundance of others in England. Upon remembering Pevensey Castle as the first fortification built by William the Conqueror nearly 1,000 years ago, its awe-inspiring history becomes evident. William would not recognize the castle today as it was simply a wooden motte and bailey when he erected it in 1066.

The gatehouse is one of the predominant features of Pevensey Castle. While it no longer consists of two majestic drum towers flanking the vaulted entrance way, single remaining tower still conveys one of the earliest examples of this twin tower medieval design. The postern gate that once provided access to the shoreline from the castle represents an additional noteworthy portion of the architecture. During sieges, it enabled ingress and egress of supplies to/from the castle, unless besiegers restricted access to the sea. Moreover, Roman walls of the fort Anderida still exist around the medieval castle.

Upon being concealed under a dirt mound until rediscovery during the early 20th century, foundations of the keep illustrate a stunning aspect of the castle. The impressions of two massive towers flanking the entrance suggest a great tower once comprising the keep and domestic apartments therein.

Since guided tours do not exist for Pevensey Castle, I highly recommend purchase of a guidebook upon paying admission for entry within the gift shop. It contains worthwhile information as you walk around and explore the castle. There is also an audio tour avaiable in the gift shop.Given an extensive visit only requires a maximum of two hours, an excursion to nearby Hastings Castle during the same day is suggested.