Burg Lahneck resides high atop a rocky hill at the confluence of the River Lahn and River Rhine. It was built between 1240 and 1245 by the Archbishop of Mainz, Siegfried III of Eppstein to protect his territory and nearby silver mine. 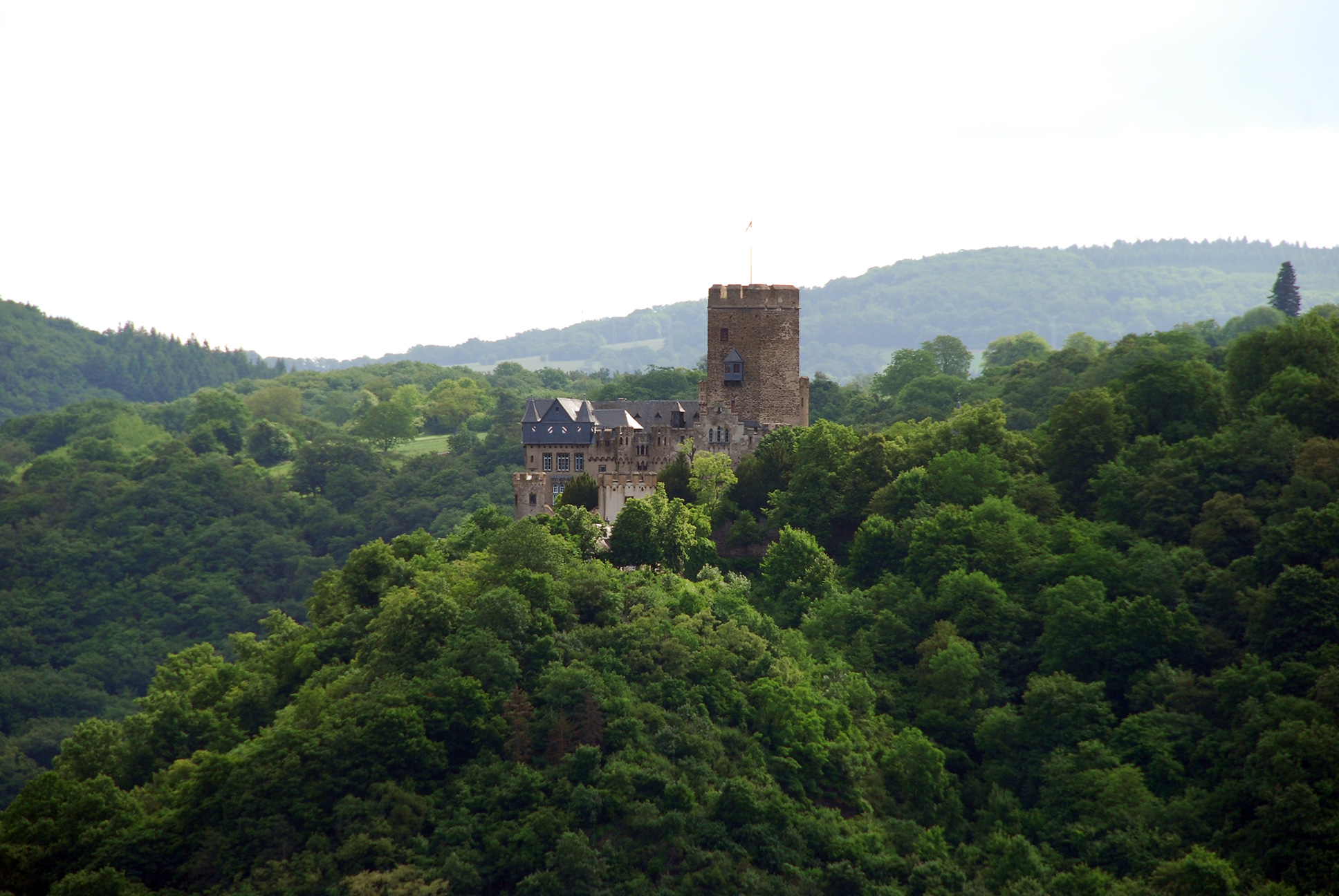 According to legend, the Knights Templar were ordered to disband by Pope Clement V in 1312. This led to the last 12 Templars taking refuge within Burg Lahneck where they perished in a fight to the death against overwhelming forces of the Archbishop of Mainz.

Approximately 1460, Dieter von Isenburg fortified the castle by adding a 10-foot-thick outer shield wall to protect the keep and living quarters of the northern wing, which was most vulnerable to attack, as well as western outer gate and outer ward walls.

In 1633, Burg Lahneck was attacked and heavily damaged by Swedish and Imperial troops during the 30 Years War. It was attacked again in 1662, and by 1688 the structure was nothing but ruins. It would take nearly two centuries before the castle was restored to its original state in 1860. In July 1774, the writer Johann Wolfgang von Goethe wrote the poem Geistesgrub that was inspired by Burg Lahneck during his travels down the River Rhine.

In 1851, Idilia Dubb, a Scottish girl on vacation in Germany with her parents went to draw sketches of the area. After she did not return, a long search ensued but was unsuccessful. Her parents eventually returned to Scotland heart broken. Nearly a decade later in 1860, workmen restoring the wooden stairwell leading to the top of the keep located the skeleton of the young girl. The mystery regarding Idilia's disappearance was solved as she climbed to the top of the keep to get views of the Rhine and upon reaching the top, the wooden stairwell behind her collapsed. Stranded on the keep, she kept a diary recounting her last few days including desperate pleas for help that went unheard. Specifically, the last sentence within Idilia's diary read:

All I know is that there is no hope for me. My death is certain. Father in heaven, have mercy on my soul.

Burg Lahneck is privately owned and open to the public from April through November with the exception of Mondays. Its pentagon shaped bergfried or central keep is rare for German castles and stands over 30 meters high. Burg Lahneck consists of massive outer walls with respect to both height and thickness, thereby providing protection to the inner courtyard.

Primary elements of the castle include a chapel, keep, residential buildings, and inner shield wall with corner towers. Visiting interior portions of Burg Lahneck is only permitted via guided tour, which lasts about 40 minutes. Moreover, a restaurant is located outside the castle walls just beyond the west gate. Visitors may go atop the keep to experience breathtaking views of the River Rhine. In addition, Schloss Stolzenfels is visible on the opposite bank of the River Rhine.

Burgh Lahneck can be thoroughly visited within a couple of hours. The Marksburg is nearby via B42 a few miles from Lahneck and definitely worth a visit for castle lovers and curious tourists alike.

Open to the Public
11am - 4pm; April - October
Closed:
November - March and Mondays