Burg Katz resides atop a protruding hilltop between Rhine Valley and Forstbach Valley overlooking the Rhine River above the town of St. Goarshausen. Burg Neukatzenelnbogen was constructed around 1371 by Count Wilhelm II of Katzenelnbogen. 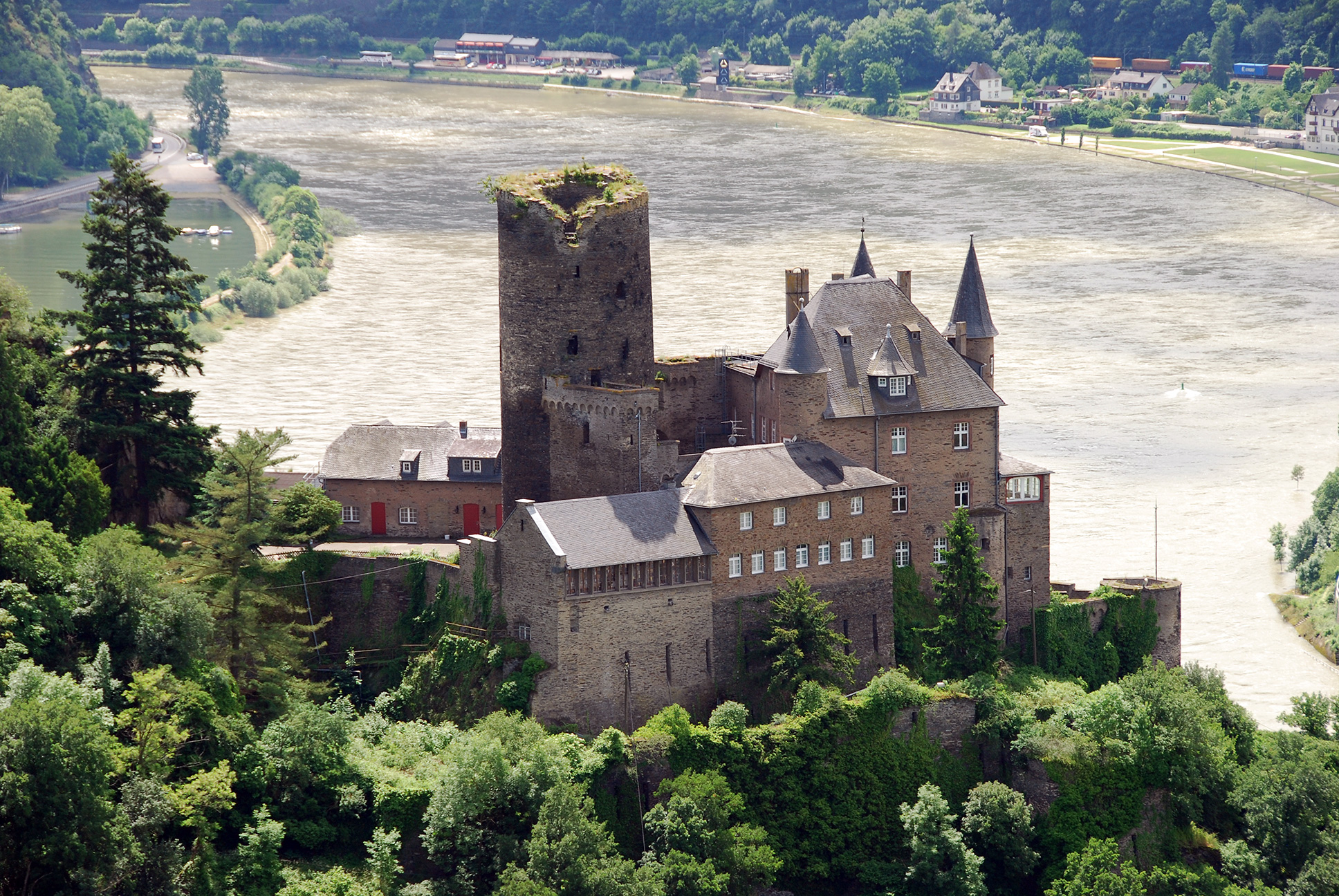 The counts of Katzenelnbogen served as a powerful family who controlled Burg Rheinfels and other castles along the Rhine. Just down the Rhine River, Archbishop of Trier built Burg Deuernburg in 1356. Shifting power and antagonism between respective castle owners, Counts of Katzenelnbogen and Archbishop of Trier, fueled much hostility. The “cat and mouse game” between them inevitably resulted with assignment of nicknames to castles that are still popular today. This is clearly illustrated by Burg Katz (Cat) for Burg Neukatzenelnbogen and Burg Maus (Mouse) for Burg Deuernburg.

Following death of last remaining count, Philipp I of Katzenelnbogen, in 1479, the castle passed to Landgraves of Hesse. In 1626, during a dispute regarding ownership within different branches of the family, Burg Katz was attacked by cannon fire from a battery of six cannons across the Rhine River which set timber roof of the castle ablaze. Cannons within the castle were able to successfully combat those across the Rhine for five weeks until they ran out of ammunition. Thereafter, the 80-man garrison within the castle surrendered.

In 1692, Burg Rheinfels across the Rhine River was attacked by 28,000 French soldiers. As a result, Burg Katz also suffered damage from French artillery fire during the attack on Rheinfels. The French returned nearly seven decades later in 1758 to launch an attack against Burg Rheinfels. Due to its deteriorated condition, the castle was surrendered without much of a fight. Burg Katz was also attacked. The garrison within Burg Katz, led by Captain von Ende, valiantly fought for three days until their ammunition was exhausted.

In 1806, Napoleon Bonaparte ordered Burg Katz to be obliterated during his battle with the Prussians, reducing the castle to ruins. The ruins had several owners until 1896 when it was purchased by Landrat Ferdinand Berg who performed various restoration efforts based upon drawings by Dilich. Since 1989, Burg Katz has been under private ownership.

Today, the castle consists primarily of a great hall and bergfried or keep that originally rose to 40 meters (approximately 131 feet) in height. While the fortification is privately owned and not open to the public, a spectacular view thereof may be attained from the village of St. Goar located across the Rhine River.

In addition, picturesque sights are possible from Dreiburgenblick above St. Goarshausen situated on the hill across the valley from the castle as pictured above. The closest castle open to the public is Burg Rheinfels, which may be reached via car ferry that crosses the Rhine River between St. Goarshausen and St. Goar.

Off the B42 along the Middle Rhine above the town of St. Goarshausen, Germany.