Brougham Castle is nestled in the tranquil Eden Valley near Eamont and Lowther rivers in Cumbria England. It was built by Robert de Vieuxpont, an agent of King John I on lands he purchased in 1214. The strategic location in Northern England, provided protection from Scottish invaders and enabled control of major routes running north to south and east to west. Moreover, the location served as a key crossing area over the River Eamont, which runs parallel to the castle. The Romans also found the location desirable as Brougham Castle was built on the site of the old Roman fort, Brocavum. Various Roman earthworks were used for medieval defenses, as well as construction of the caste itself. The original architecture featured a stone keep protected by a wooden palisade surrounding it. 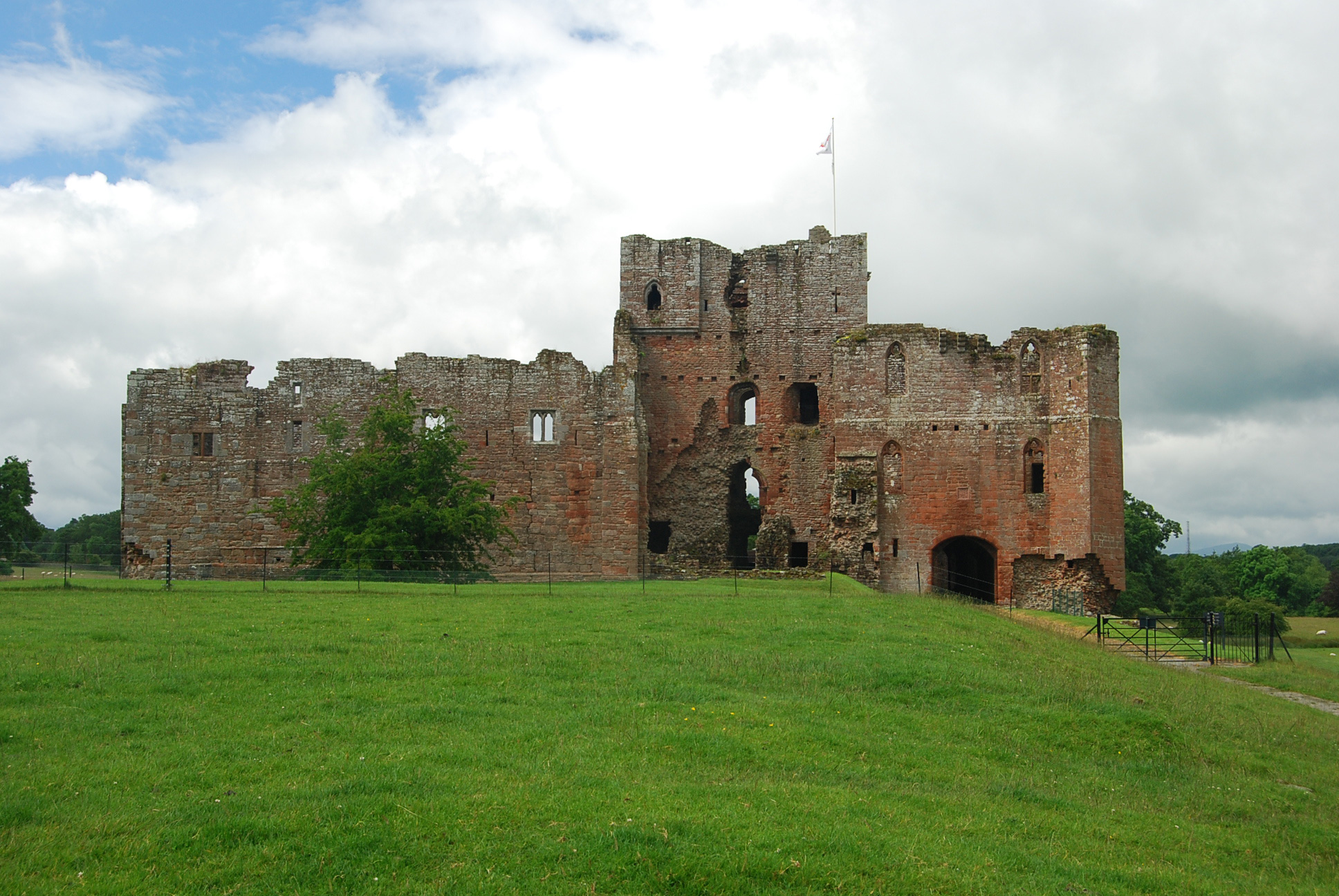 In 1268, Brougham Castle passed to the Clifford family when Robert Clifford married Robert de Vieuxpont’s great-grand daughter Isabella. Robert’s son, also named Robert, would eventually make numerous modifications to the castle, including replacement of wooden palisade surrounding the keep with a stone curtain wall around 1300. He also added the top story of the keep, built the gatehouse complex and added a foreboding southwest corner tower, called the Tower of League, which greatly enhanced the defensive features of the castle.

In 1300, the distinguished King Edward I stayed at Brougham Castle on the 22nd of July during his travels to Scotland and northern England. Robert Clifford served as a vital asset to the king during the Anglo-Scottish wars that began in 1296 and lasted for centuries thereafter. In the 1380s, Robert’s grandson, Roger Clifford, made even more enhancements to the castle by adding more buildings along the south curtain wall including a new hall. Despite new fortifications, the castle was successfully attacked and damaged by the Scots in 1388.

During the middle 15th century, Brougham Castle played a pivotal role in the Wars of the Roses as the Lancastrian Clifford family competed with the Yorkist Neville family over control of northwest England. The castle was granted to the Neville family by Edward IV in 1461 after John Clifford was killed during battle in support of Henry V. John’s son, Henry, recovered Brougham Castle and remaining family estates from Henry VII. Under the Tudors, the Clifford family once again prospered. In years to follow, Brougham Castle experienced a decline in use. An inventory conducted in 1595 revealed a castle in decline as it listed old furniture, in addition to decaying pots and pans.

In 1605, the castle experienced a resurgence as it was refurbished by the Countess Margaret. In 1617, King James I and his court were lavishly entertained for two nights at Brougham Castle where they feasted on foods including quail and peachicks. Lady Anne Clifford who was famous for her work regarding restoration of castles and lands, began to add new buildings for baking and brewing, in addition to gardens in 1650. She frequented Brougham Castle via numerous extended visits, and in fact, died there on March 22nd of 1676. Thereafter, the castle was maintained until 1714 when the Earl of Thanet decided he did not need all the castles passed to him and focused upkeep solely on nearby Appleby Castle. As a result, Brougham’s furnishings and other items of value were sold with the castle left as a roofless ruin.

During the 1840s, extensive repairs were performed in an attempt to preserve the remaining ruins of the Brougham Castle. However, these were deemed too expensive to maintain and eventually abandoned. In 1928, ruins of the castle were placed under the guardianship of the Ministry of Works, predecessor to English Heritage. They removed most of the masonry additions constructed during the 19th century. The castle appears today much as it did in the 1930s by the Ministry of Works.

Brougham Castle, though just a ruin, still retains much of its original stonework. Consequently, visitors can easily visualize how dominating its architecture would have been when intact. It is no wonder the Clifford family chose the castle as their seat of power in northwest England. The castle is somewhat unique given its two gatehouses separated by a courtyard. The second outer gatehouse was added later to bolster defenses. Other castles typically contain a large barbican with two sets of doors and portcullises. However, it is very rare for castles to feature two different separate gatehouse buildings.

The keep remains the largest part of Brougham Castle as it spans four floors. Evidence of vaulted ceilings and arcading are still visible on the first floor. Just one floor above, the Lord’s Chamber was utilized by Lady Anne Clifford when she frequently visited the castle. It was in this same room where she eventually died. Along the south curtain wall, foundations and remains of other buildings may be seen including the chapel and lodgings where garrison troops once stayed. The ruins of the Tower of League, which hosted guests and afforded defensive measures, still stand in the southwest corner of the structure.

The romantic ruins and picturesque setting of Brougham Castle were often visited by poet William Wordsworth when he was a child. It later inspired his writing about Brougham Castle in The Prelude:

“That river and those mouldering towers
Have seen us side by side, when, having clomb
The darksome windings of a broken stair,
And crept along a ridge of fractured wall,
Not without trembling, we in safety looked
Forth, through some Gothic window’s open space,
And gathered with one mind a rich reward
From the far-stretching landscape”