Approximately 956, the Count of Blois, Theobald, constructed a Benedictine Abbey to hold relics of Saint Florent, an Anjou evangelist, who died in 360. To protect the relics and abbey itself from Counts of Anjou, a fortified stronghold, Château de Saumur, was constructed in 962. 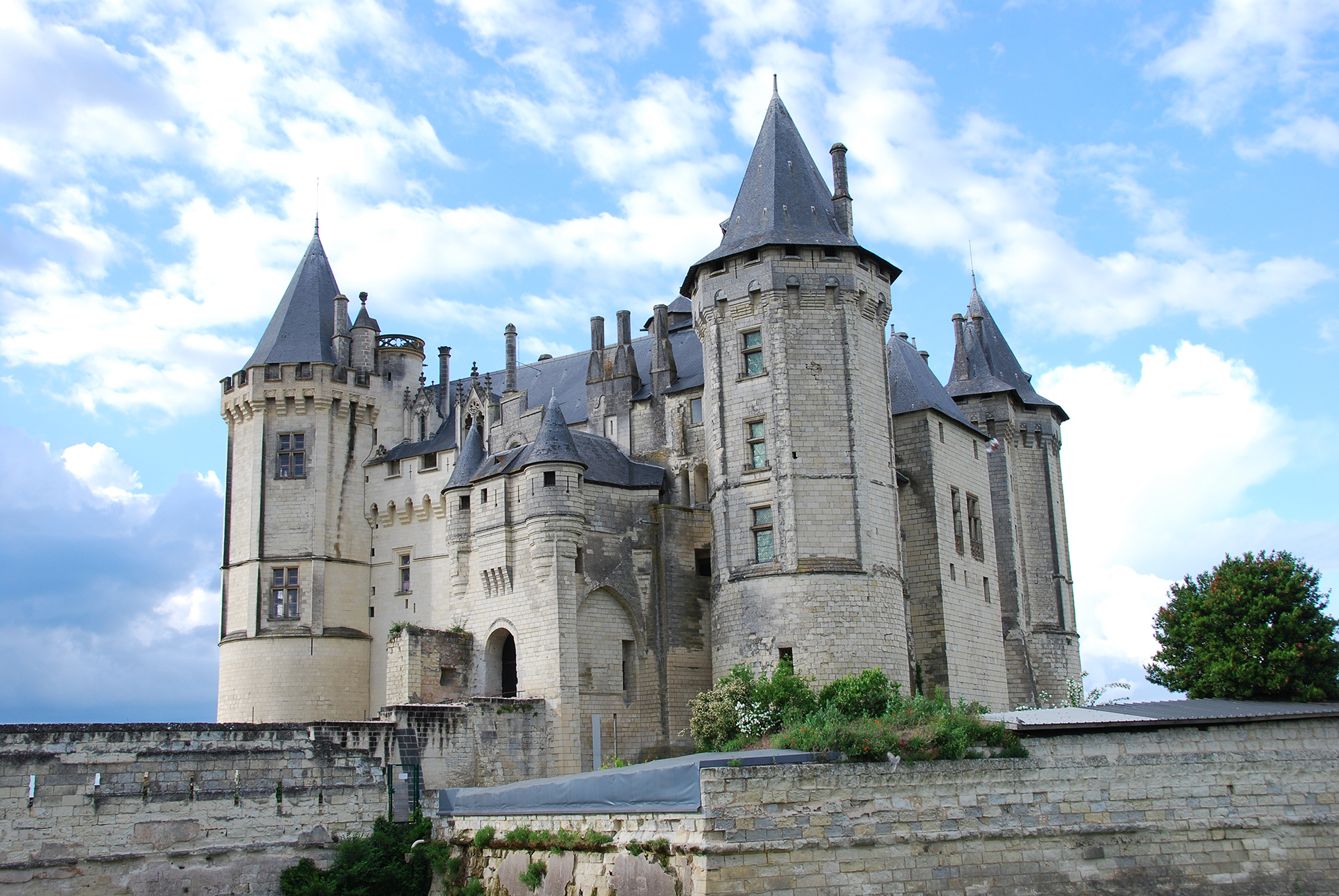 In 1026, the rivalry between the Counts of Blois and Anjou climaxed when the castle and abbey were seized by Fulk Nerra. Thereafter, buildings were set ablaze and monks, faithful to the Count of Blois, were ejected from the castle. Throughout the remainder of the 11th century, Château de Saumur was controlled by the Counts of Anjou. In 1068, the structure was once again destroyed by fire. Afterward, a keep was constructed in its place.

Before leaving for the Holy Land in 1119, Fulk V arranged for the marriage of his son, Geoffrey, to Empress Matilda, daughter of the King Henry I of England. Geoffrey, who was called Plantagenet for the yellow flower he wore, became the Count of Anjou at the age of 16 in 1129. The son of Geoffrey and Matilda eventually became King Henry II of England, as well as Count of Anjou. Henry II, his wife Eleanor, in addition to their sons, Richard (the Lionheart) and John visited Saumur many times. In 1188, Henry held his Christmas court at the castle.

In 1203, King Phillip Augustus of France seized the keep and took control of Château de Saumur. Subsequently, it was fortified with four drum towers connected by curtain walls. Approximately a quarter of a century later in 1230, Louis IX of France retook the city of Angers in the Loire Valley as Henry II withdrew to England and Anjou including Château de Saumur was reintegrated into the French royal property.

During the Hundred Years' War, Louis I of Anjou performed upgrades to the castle, which would rival architectural projects of his brothers, King Charles I and Dukes of Berry and Burgundy. In 1368, initial work began with construction of the north wing along the banks of the Loire River. It included a great state room and chapel. Lead for roofing was attained from the Château d'Angers, Chinon, and Loudon. In 1380, the Romanesque tower was mostly demolished prior to construction of the west tower and wing. In addition, the south wing, as well as new châtelet entrance were built towards the end of the 14th century, which completely enclosed the quadrilateral castle.

In 1793, the army of the Vendee ransacked the castle after seizing it. The state of damage was so severe, that in 1797, the army prepared plans for its demolition. As Napoleon Bonaparte was passing through Saumur in 1808, he decided to convert the castle into a state prison, which saved it from ruin. The castle was drastically altered as large windows, staircases and passages were sealed in order to create 745 cells across the three wings of the structure. State prisoners held in Saumur were freed during the Bourbon Restoration.

In 1815, Château de Saumur changed ownership to the French Minister of War who designated its use as an arms and ammunition dump. Its use as a place of refuse remained unchanged until 1889. In 1906, the town of Saumur purchased the castle back from the state to serve as a municipal museum. Subsequent renovation work included restoration of rooms to their original sizes and reopening of staircases, fireplaces, windows, as well as addition of sculpted décor. In June 1940, the castle sustained heavy damage to the north wing when it was struck by more than 100 shells during the Battle of Saumur in World War II. Not until more than half a century later in 1997 did final restoration begin on the south wing, west tower, and dormer windows.

Château de Saumur resides majestically above the Loire River in the town of Saumur. Its white stone, medieval drum towers with machicolations and blue colored roof convey both a sense of power and romance directly from a fairytale. Highly recommend planning some time to study the walls of inner courtyard as there are numerous sculptures of animals to discover along the walls that would probably get overlooked when casually walking through the area.

Since the castle is open to the public, you may choose to explore its interior at your own pace or as part of a guided tour that explores most rooms while providing informative history thereof. Moreover, a large collection of decorative ceramics and tapestries, in addition to various equestrian related artifacts adorn the castle as the town is famous for its horses, equestrian center and military cavalry school. To supplement your visit to Château de Saumur, strongly suggest drive over the bridge and Loire River to get magnificent views of the castle and town from the opposite bank.

Sign posted along the D947 in the town of Saumur.