In comparison to other castles, Schloss Neuschwanstein is still in its infancy as it was built in the late 19th century. Its construction began on September 5, 1869 by King Ludwig II who spent his childhood at Schloss Hohenschwangau. This location is just a few hundred yards away from Neuschwanstein. 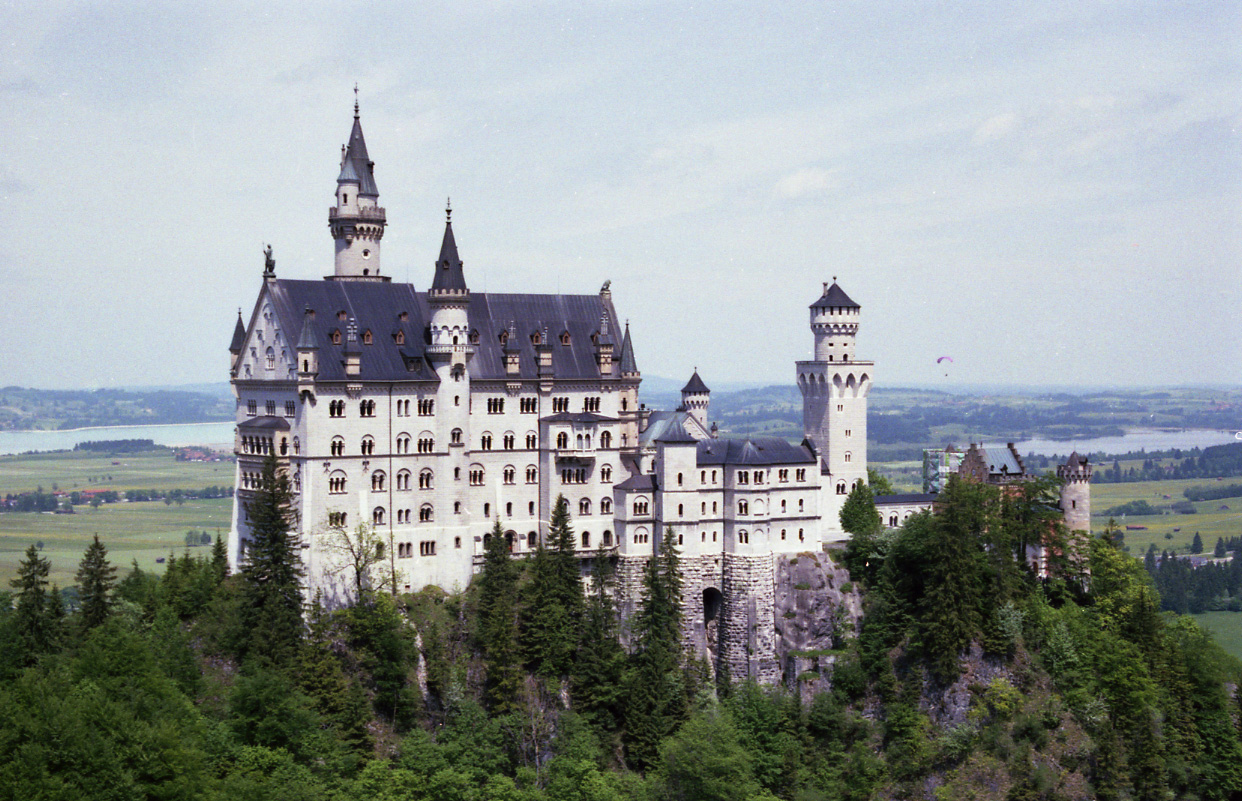 In comparison to other castles, Schloss Neuschwanstein is still in its infancy as it was built in the late 19th century. Its construction began on September 5, 1869 by King Ludwig II who spent his childhood at Schloss Hohenschwangau. This location is just a few hundred yards away from Neuschwanstein.

Prior to his reign, Ludwig spent his days dreaming of medieval knights and exploring the surrounding Alps. After his father, King Maximilian died suddenly, Ludwig became King of Bavaria at an early age. While Ludwig and Bavarian politicians did not agree, he followed his heart and decided to build a castle rather than be concerned with political matters. It would be no ordinary castle but a palace in the sky. He chose to build it on the ruins of Vorder and Hinterhohenschwangau above Schloss Hohenschwangau where he was raised.

Ludwig decided to build a castle resembling old German knight castles, which evolved into the Romanesque style during the planning stages. The king's passion for epic German sagas was influential regarding its design. In fact, stage set designers assisted with the design of the castle. Consequently, the interior depicts various scenes from the great operas written by Richard Wagner, which were based on the legends of Tannhauser and Lohengrin. An additional tower dwarfing the remainder of the castle was planned for the courtyard of Neuschwanstein but Ludwig died before its construction could begin. In fact, only 14 rooms of the castle were completely finished.

While construction was underway at Neuschwanstein, King Ludwig was building Linderhof and Herrenchiemsee castles with plans for a fourth structure. The king's relatives decided too much of the royal fortune was being squandered by the dreamer on his fairy tale castles so they had him declared insane. As a result, Ludwig was arrested on June 12 1886 at Neuschwanstein and taken to Berg Palace on Lake Starnberg. His body was discovered the next day in the lake along with his psychiatrist, Dr. Bernhard von Gudden. The king's death remains a mystery to this day. Some say he was murdered while others say it was suicide.

Seven weeks after Ludwig's mysterious death, Schloss Neuschwanstein was opened to the public. Today, Neuschwanstein is one of the most popular castles to visit in Europe. Every year, approximately 1.3 million people visit the castle of the fairy tale king.

In my opinion, this is one of the must see castles in the world. I visited the castle seven times and was amazed each time. Due to its location high atop a hill, it is a long uphill climb to the castle with numerous steps to navigate once inside. However, it is well worth the effort. There is a horse drawn carriage from the village to a location near the top of the hill for a small fee.

A guided tour of the castle interior is highly recommended. Purchasing tickets in the town before embarking on the uphill climb to the castle is also necessary. All of the finished rooms inside the castle exhibit exquisite detail in the wood carvings and paintings on the walls. However, three rooms in particular stand out from the rest.

The Throne Hall includes a huge chandelier in the shape of a royal crown, in addition to depictions regarding the legend of Parzival (Parisfal) on various walls. There are also images of six European rulers and Christ above the kings over the throne area. The only item missing from this room is the throne itself. The king's bedroom is the only portion of the castle designed in Gothic style. The wood carvings on the bed and canopy are amazing. There is also a secret door, which blends seamlessly into the wall to Ludwig's bathroom. The last room on the tour, Minstrels Hall, resides at the top of the castle. It was designed so Ludwig could have private showings of his favorite operas and plays. The hall was modeled after the banquet hall in the Wartburg.

Above the village of Hohenschwangau. 40 minute walk up hill from Alpseestrasse.