Curse and Ghost of Fyvie Castle

In the Grampian region of Scotland, north of Aberdeen, stands Fyvie Castle. The castle was originally built as a royal fortress around the time of William the Lion, in the early 13th century. The land around the castle was a royal hunting forest and its name means “Deer Hill” in Gaelic. Later, Robert the Bruce would sometimes dispense justice in an open-air court held beneath the Beachwood trees at Fyvie Castle. 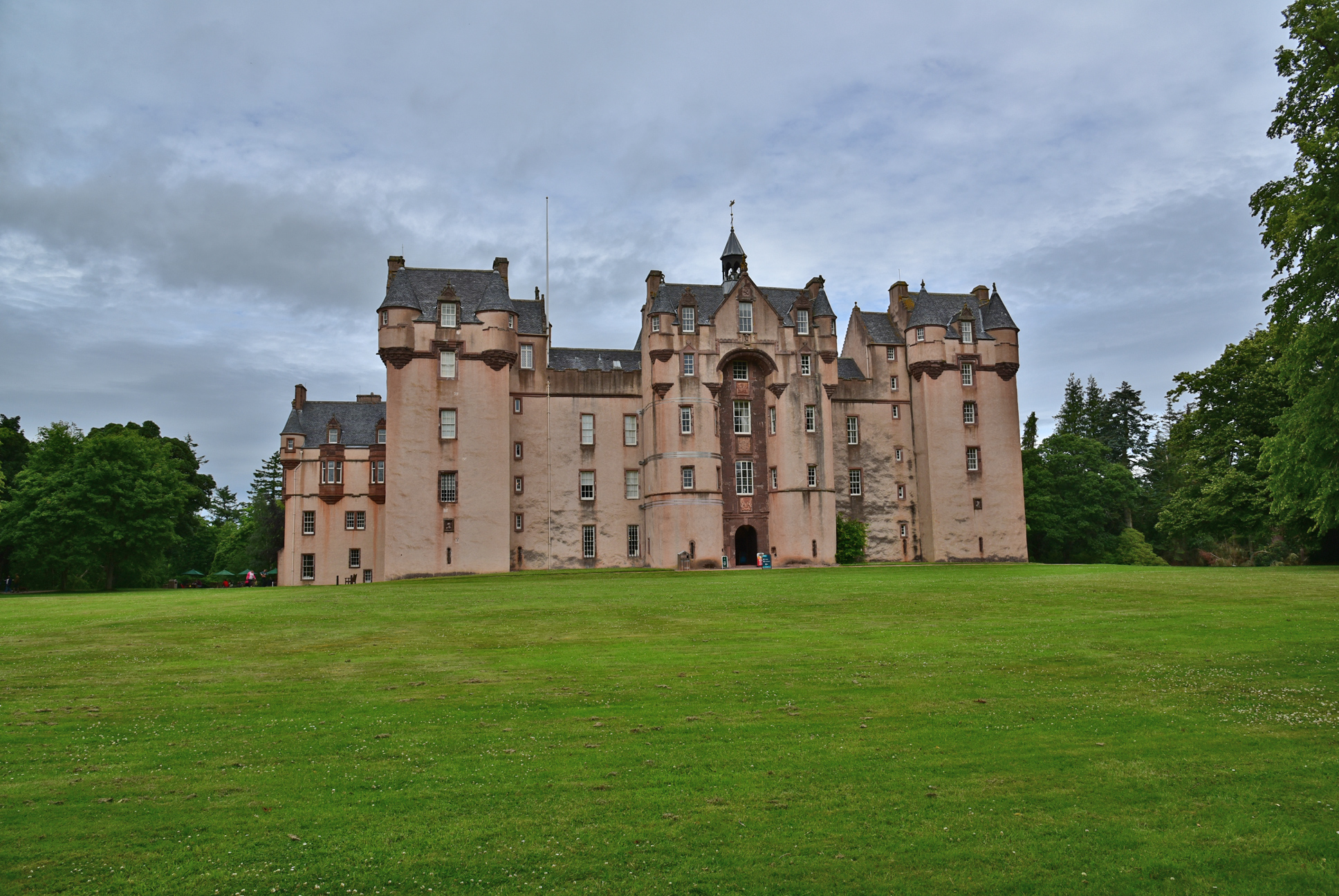 Fyvie Castle is most famous for its mysterious curse and ghosts. The curse is known as the Weeping Stones Curse and is almost as old as the castle. The curse’s ominous presence hangs over the castle and can still be felt to this day.

Over 500 years ago, a prophet named Thomas the Rhymer, who was renowned for his gloomy predictions and ill-temper, announced that he wished to visit Fyvie Castle. In anticipation of his arrival and to welcome him, the castle’s great doors were opened and left open at all times. But years went by and Thomas had not come to visit the castle. Still the doors stood open. Seven years and a day after he first announced his wish to visit the castle, Thomas finally arrived. But as he approached the entrance, a freak storm brewed up and the wind slammed the doors closed in his face.

Thomas viewed the incident as a personal insult and in his anger, laid a curse upon the castle and its lands.

The curse spoke of three stones taken from the boundary markers of the castle lands. Thomas’s curse decreed that until all three stones were found a reunited, a hex would remain on Fyvie. The first born sons of the families that lived at Fyvie would never inherit the castle.

One stone was recovered and has been protected ever since. The other stones were never found and the curse remains on the castle. To the owners of Fyvie Castle, the curse is indeed real because through the generations since the curse, the castle has passed to second sons or daughters and in some cases more distant relations, with the natural heirs being lost to wars and sickness.

The weeping stone also has an unexplainable physical property. Although kept in dry conditions in a wooden bowl, the stone becomes wet and the bowl fills with moisture. Thus, the weeping stones.

The curse is so powerful that the weeping stone that was found and kept in the castle still exerts its evil influence. A curator examining and preparing the weeping stone for display to the public would experience random health problems after spending considerable time in close proximity with the stone. The first time he twisted his ankle, as did the surveyor who was also near the stone on the same occasion. The next time, the curator sprained his knee, and the third time when he prepared the stone for the showcase, he was rushed to the hospital in the middle of the night with kidney stones. And since, he has tried to avoid any close proximity to the stone. The weeping stone is pictured here, from my visit in July, though I took it from across the room and zoomed in as to not take any chances with the curse. 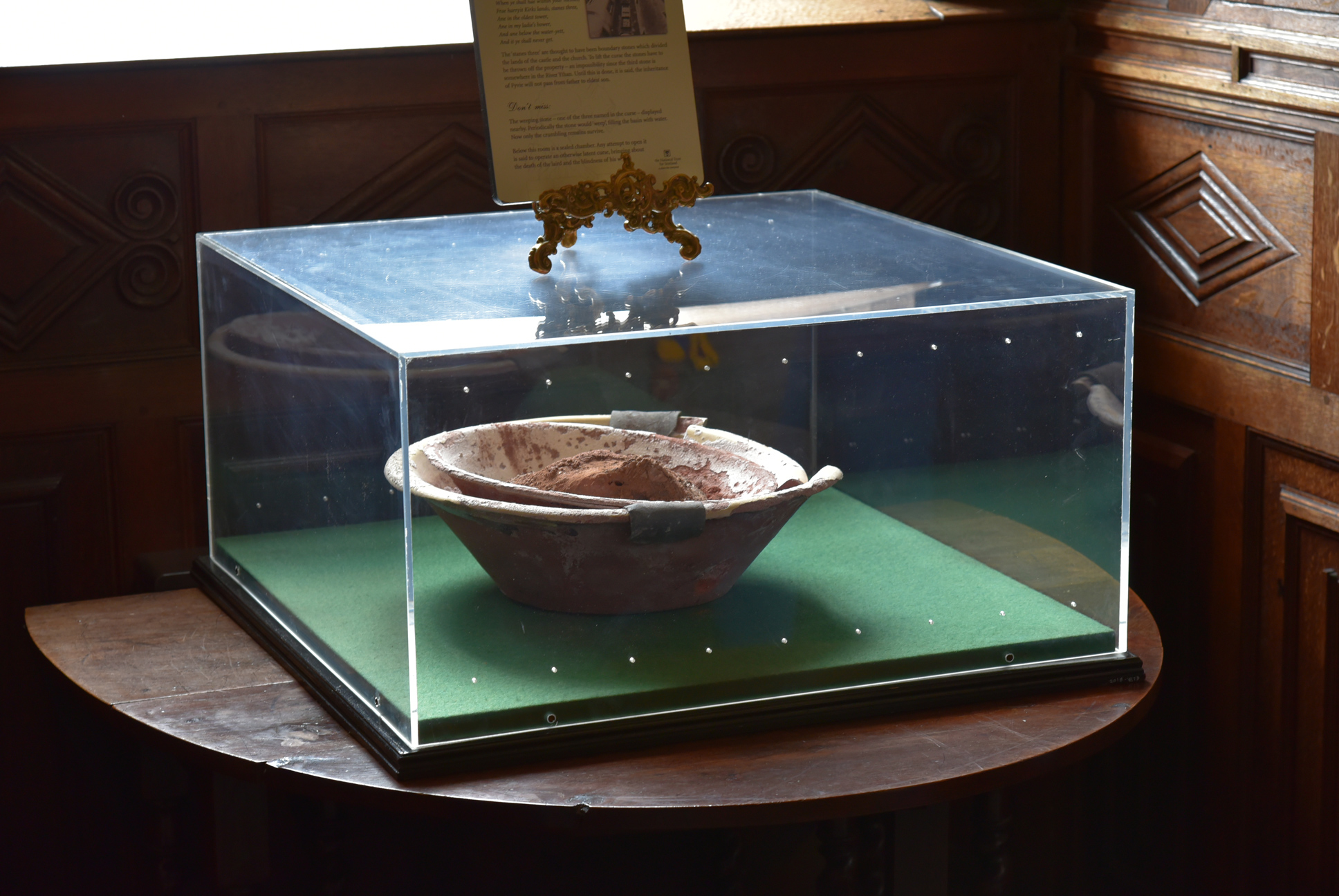 The most famous ghostly inhabitant of the castle is the Green Lady.

Fyvie is one of Scotland’s most magnificent castles. Its soaring baronial walls are crowned by five majestic towers, each, so tradition claims, a monument to the five families – Preston, Meldrum, Seton, Gordon, and Leith – who, over the centuries, help create this spellbinding stronghold of rambling corridors and splendid rooms.

Although now run by the National Trust for Scotland, Fyvie still has the feel of a family home, and the ghosts and legends that have collected both around and within its sturdy walls lend it a definite air of mystery. The best-known specter here is that of the “Green Lady”, thought to be Dame Lilias Drummond, wife of Alexander Seton, owner of the castle in the early 17th century. They had five children, all of whom were daughters, and this rankled with the ambitious Seton, who longed for a son. One day, his discontented eye fixed upon one of his wife’s relatives, a young woman named Grizel Leslie. Grizel more than welcomed his advances, and very soon the two were enjoying a passionate affair. Neglected by her husband, Dame Lilias retired to her house in Fife, where she became ill, and died on May 8, 1601. She was barely cold in her grave before Alexander Seton had married Grizel and brought her to live at Fyvie Castle. On their wedding night, they were disturbed by moans and heavy sighs from outside their bedroom window. Seton comforted his terrified wife, assuring her that it was just the wind. But the next morning, on opening the window, he found etched into the solid stone of the outside ledge the name D LILLIAS DRUMMOND. The mysterious impression is still there, while Lilias’s spirit, swathed in green, makes frequent returns to the stairways and corridors of the old castle. Bemoaning her betrayal and leaving the delicate fragrance of rose petals in her ghostly wake. 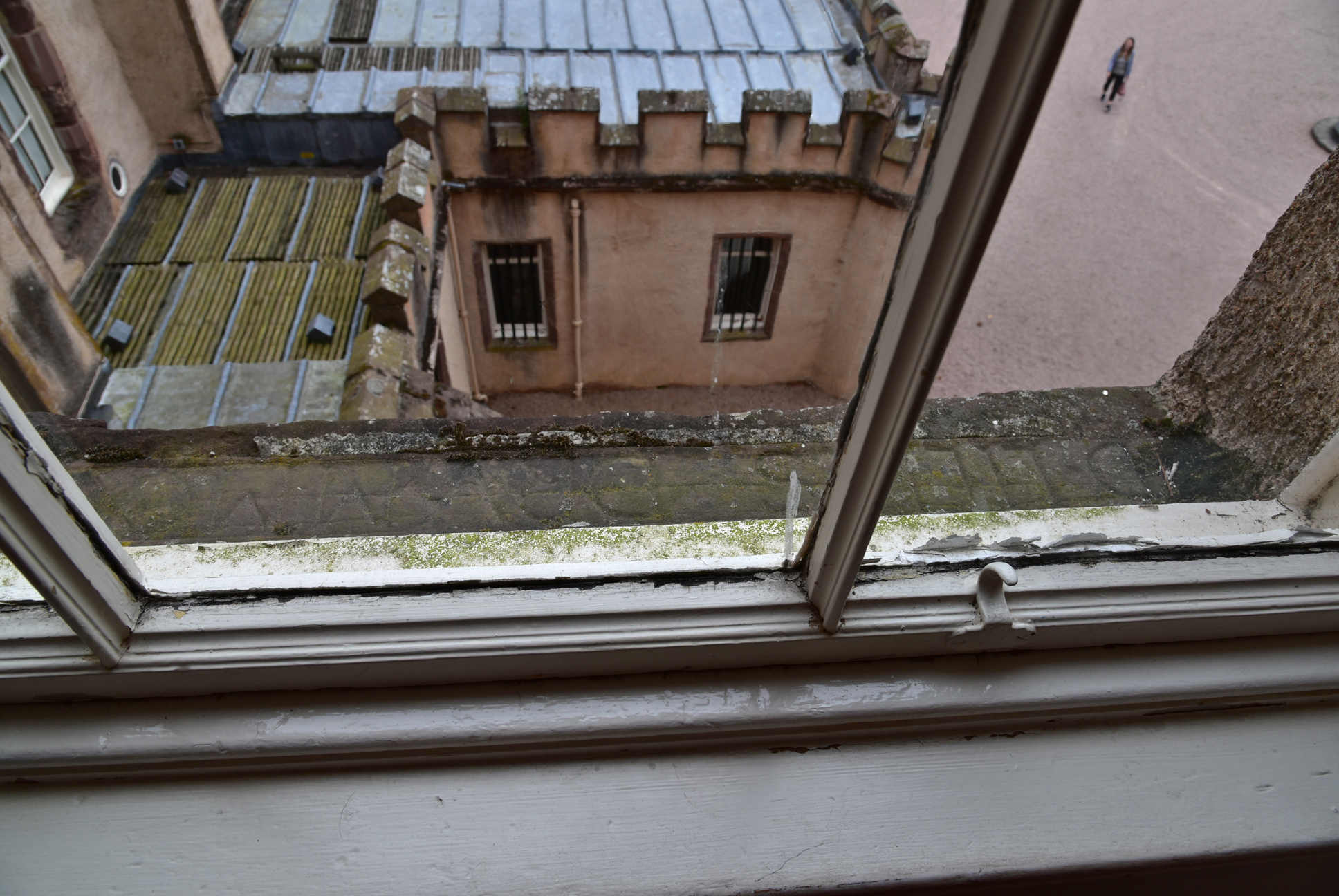 In July 2002, an Australian visitor saw her in the dressing room off the Gordon Bedroom – where the castle guides often complain of feeling that they are being watched. A member of staff , who one winter’s day was cleaning the castle armor, stepped aside to let a lady in a flowing dress pass by, and was astonished when she suddenly vanished. Another visitor was somewhat taken aback to see a woman’s reflection gazing through a green mist in a bedroom mirror. Dame Lilias is a harmless specter on the whole, accepted as simply the oldest resident of this special and spellbinding fortress.