Etal Castle resides in a strategic position near a ford in the River Till, not far from the Scottish Border in Northumberland England. It was built in the 14th Century by Robert Manners. The earliest mention of the estate dates back to a document in 1180 that records a Robert Manners holding lands worth half a knight’s service within the barony of Wooler. Another document in 1232 links Robert to the manor of Etal.

The early Manners family would have most likely lived in a sturdy timber hall complex. Given the turbulent times due to the proximity of the border with Scotland, the timber hall would have been replaced by a strong stone building as quickly as they were able to build one. No records indicate when a stone building was constructed, but it was likely to have occurred in the last years of the 13th century as the third Robert Manners was recorded as lord of Etal and knighted in 1278 for services to the king. The Archbishop of York also chose to stay at Etal in 1291 on a visit to the north. 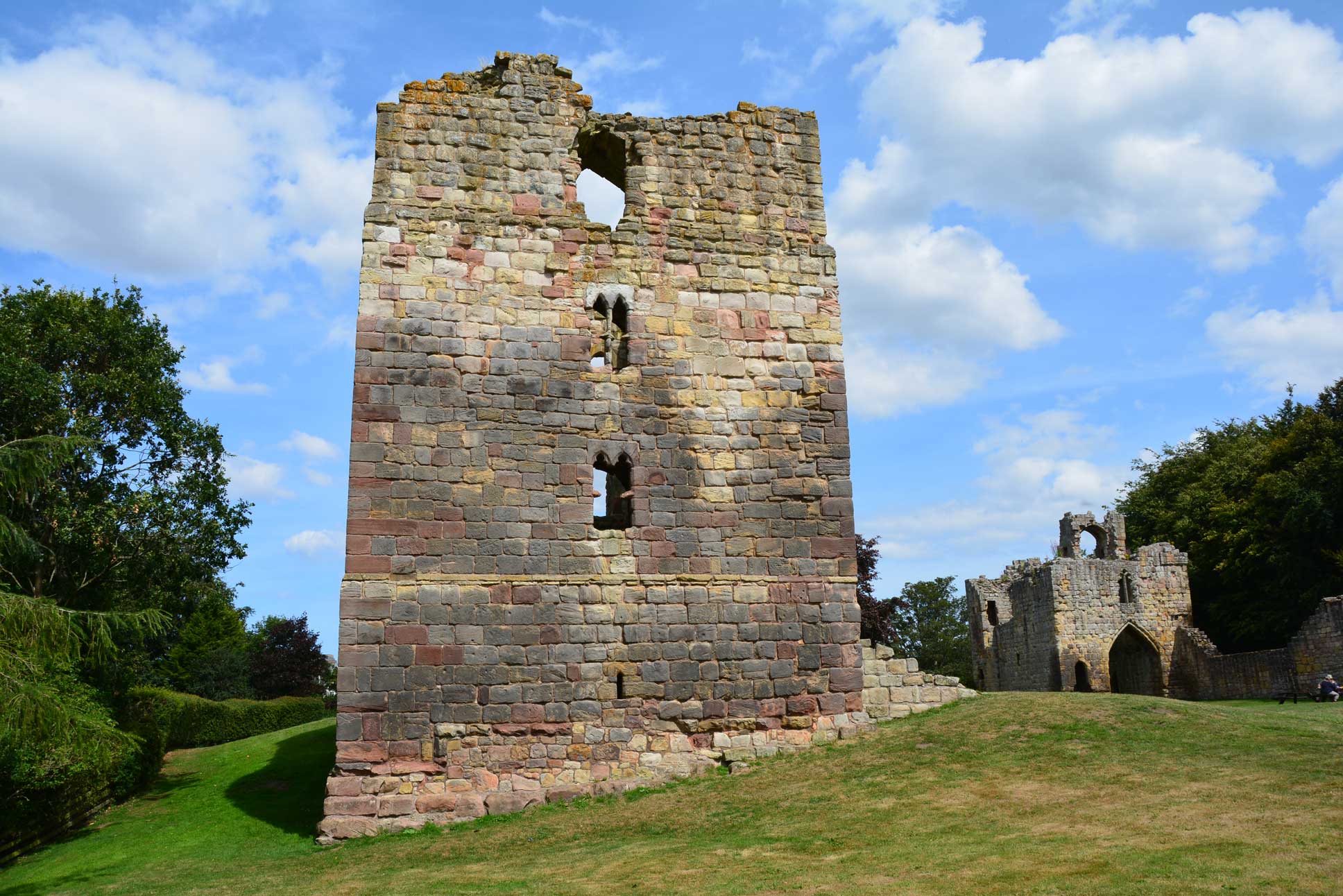 In 1336, his son, also named Robert, is recorded as lord of Etal. By then Edward III had taken up the mantle to press on with his Grandfather Edward I’s endeavor to subjugate Scotland. Thus in 1341, Robert Manners was granted a license to fortify or crenellate. It was at this time that he strengthened the stone hall by adding an additional floor and parapets to the hall. A simple wooden palisade wall probably surrounded the building and courtyard as a survey of border fortifications in 1355 refers to Etal as a “fortalice” which is a building of lessor strength than a castle.

Robert’s son, John, succeeded him as lord of Etal after Robert’s death in 1354. It was John who added the stone curtain wall, towers and gatehouse, which must have been completed by 1368 when another survey records Etal as a castle. A few generations later, another Robert Manners inherited Etal Castle, now in ruins due to a drop in value of the estate, worth only a twentieth of a knight’s service instead of the original assessment of half a knight’s service. The drop in value was due the strife caused due to its location near the border of Scotland as well as a bitter feud with the Herons of Ford and their estate at nearby Ford Castle, which also suffered a similar drop in value.

Robert Manners was an active leader who accompanied Sir Henry Percy on his duties on the border. He was granted a knighthood for his service and furthermore, was granted goods and rents of the outlawed Sir Robert Ogle, enabling him to restore his family fortunes. Robert was killed during the Wars of the Roses when serving the Lancastrian side, when he fell at the Battle of Towton in 1461.

In 1513, Etal Castle would be implicated in the nearby Battle of Flodden Field. An army of 30,000 Scots led by King James IV invaded England while Henry VIII and the English Army were fighting in France. The nearby castles of Wark and Norham were attacked and fell to the Scots who then moved on to Etal Castle and Ford Castle. Neither Etal nor Ford were built to withstand a major siege and after a brief bombardment, Etal Castle surrendered and was garrisoned by the Scots. Ford Castle quickly followed suit and was used as headquarters for James IV while the Scottish Army encamped on Flodden Hill to await the response from England. They did not have to wait long. On September 9th 1513, the Earl of Surrey with a hastily put together army of 20,000 outmaneuvered the Scottish Army and defeated the Scots in a bitterly fought battle. James and almost all his nobles were killed in the battle and his formidable collection of artillery was hauled to Etal Castle for safekeeping.

The castle passed to the crown in 1547 and was garrisoned as part of the defenses guarding the border with Scotland. The castle was abandoned after and fell into disrepair as reported in 1564 when the buildings where described as being “scant able to lodge the captain”. In 1603, James VI of Scotland inherited the Kingdom of England, uniting the two thrones, and Etal Castle lost its military value and passed into private ownership. By the 18th century it ceased to be used as a residence. In 1908, Lord Joicey bought the castle and by 1922 the ruins had been stripped of ivy and stonework repaired. The castle was place into the guardianship of the state in 1975. Today the castle is managed by English Heritage.

Etal Castle is a very tranquil place to visit today, located on the edge of the small village of Etal. The most prominent feature of the castle is the Tower House. Now in a ruin state, it still rises over four stories in height. This should not be mistaken for a central keep as in most Norman style motte and baily castles. The Tower House was more of a defensible home for the lording family.

The gatehouse is also formidable and enough remains to understand its original architecture. The gatehouse was two stories in height with flanking towers on either side that rose an additional story. Two cannons salvaged from the shipwreck of the Royal George are place in front of the gatehouse, facing the village.

Etal Castle can be thoroughly explored in an hour or two. To make a full day of castling, Ford Castle and Norham Castle are both close enough to explore the same day. If a major castle is more on your itinerary, Bamburgh Castle on the Northumberland coast is close enough to visit the same day as well, though I recommend starting at Bamburgh Castle and visiting Etal Castle afterwards.

Sign posted off the B6354 in the Village of Etal.