Records regarding the Eltz family date back to 1157 when Rudolph von Eltz was referenced as a witness concerning a deed of gift associated with Emperor Fredrick I Barbarossa. Burg Eltz was built in a strategic position along the lower Eltz River, which serves as a tributary of the Mosel River. This was a popular route linking the Mosel with the Eifel River. The castle was built atop a 70 meter high rock giving it a commanding view of the Elzbach Valley and River Eltz, which flowed around the base of the castle on three sides. 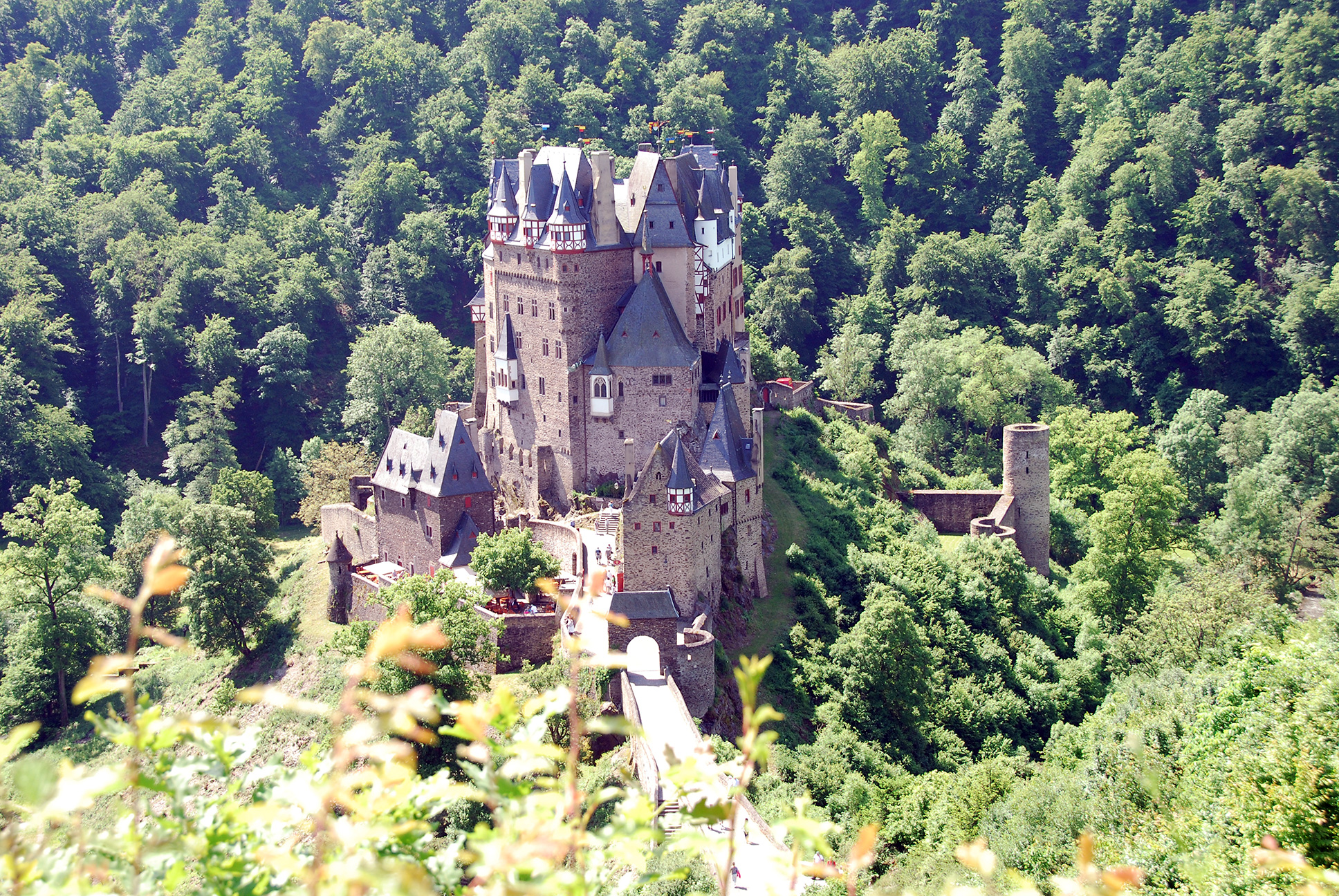 In 1268, the Eltz family split into three separate branches. Thereafter, each branch built their own houses and towers within the castle over the next 400 years. Thus, Burg Eltz became a Ganerbenburg in which several families shared common areas of the castle including the courtyard, well and chapel while also maintaining their own private living quarters. Today, the Lion Or branch of the Eltz family remains as the sole owner of the castle. The castle consists of eight towers with living quarters grouped around an inner courtyard.

Although Burg Eltz has existed for nearly 900 years, it has seen little action in military conflict. The only significant event occurred in the 14th century. Elector Balduin of Trier, uncle to Charles IV, tried to enforce the peace in his electorate as free knights of the Holy Roman Empire believed he was infringing upon their rights to private warfare. On June 15, 1331, the knights from various castles including Burg Eltz formed an alliance against Balduin. Later that year, Balduin erected a siege tower outside of Burg Eltz and bombarded the castle with heavy stone balls. He also severed all supply lines from the castle, which forced the knights to concede. In 1354, Emperor Charles IV gave Burg Eltz as fief to Elector Balduin. Thus, the free knights of Burg Eltz became the vassals of the Elector and took Burg Eltz from him as feudal tenure.

Burg Eltz is one of the few Rhenish castles never to be destroyed. As a result of skillful diplomacy, the castle avoided conflict during the Thirty Years War when most of the Rhine castles were destroyed by the French.

Visiting Burg Eltz is like stepping into an enchanting fairy tale. You can hear the sounds of birds singing as you walk along the road through the forest. Suddenly, the forest opens up to reveal a cliff overlooking Burg Eltz. With Tudor style buildings and cone shaped roofs, Burg Eltz is one of the most beautiful castles in Germany.

The only way to view the interior of the castle is to purchase tickets in the gift shop for a guided tour. The tour begins in the castle courtyard and continues into the armory, which contains suits or armor, weapons including lances used in jousting tournaments, as well as other exquisite medieval items. The tour includes an opportunity visit to the Knights Hall. This room contains remarkable items including armor dating back to the 16th century, as well as panel paintings depicting scenes from the Old Testament. In addition, the Knights Hall is adorned with the Eltz family Coat of Arms.

After taking the castle tour, be sure to visit the castle Treasure Chamber. Here you can see an extensive collection of fine art and treasures, which were collected by the Eltz family for nearly 900 years. The collection includes gold and silversmiths' works, coins, medals, weapons, armor, sacred objects, jewelry, in addition to many other items of value and historical significance. It is a great way to complete your castle excursion.

As mentioned above, Burg Eltz contains a gift shop with a wide selection of very nice items. While credit cards were not accepted during my last visit in 2002, it may be beneficial to carry some Euros in case they are still not considered a valid form of payment. In addition to a gift shop, Burg Eltz includes two nice restaurants. Lastly, should you have trouble climbing the hillside or simply desire a rest, a shuttle bus costing a Euro or so, is available for traveling between the front of the castle to the car park.

From Munstermaifeld, take the K37 towards Wierschem, and follow the signs to Burg Eltz.