The most besieged castle in Britain, Edinburgh Castle, was attacked 23 times throughout its history. The fortification resides high atop Castle Rock, an extinct volcanic outcrop in the center of Edinburgh. Although human occupation of Castle Rock dates back to the 2nd century, oldest portion of the current structure exists from the 12th century during reign of King David I. In 1093, his mother, Queen Margaret, died at the castle upon hearing her husband, King Malcolm III, was killed in battle. Thereafter, David built St. Margaret's Chapel in honor of his recently deceased mother. 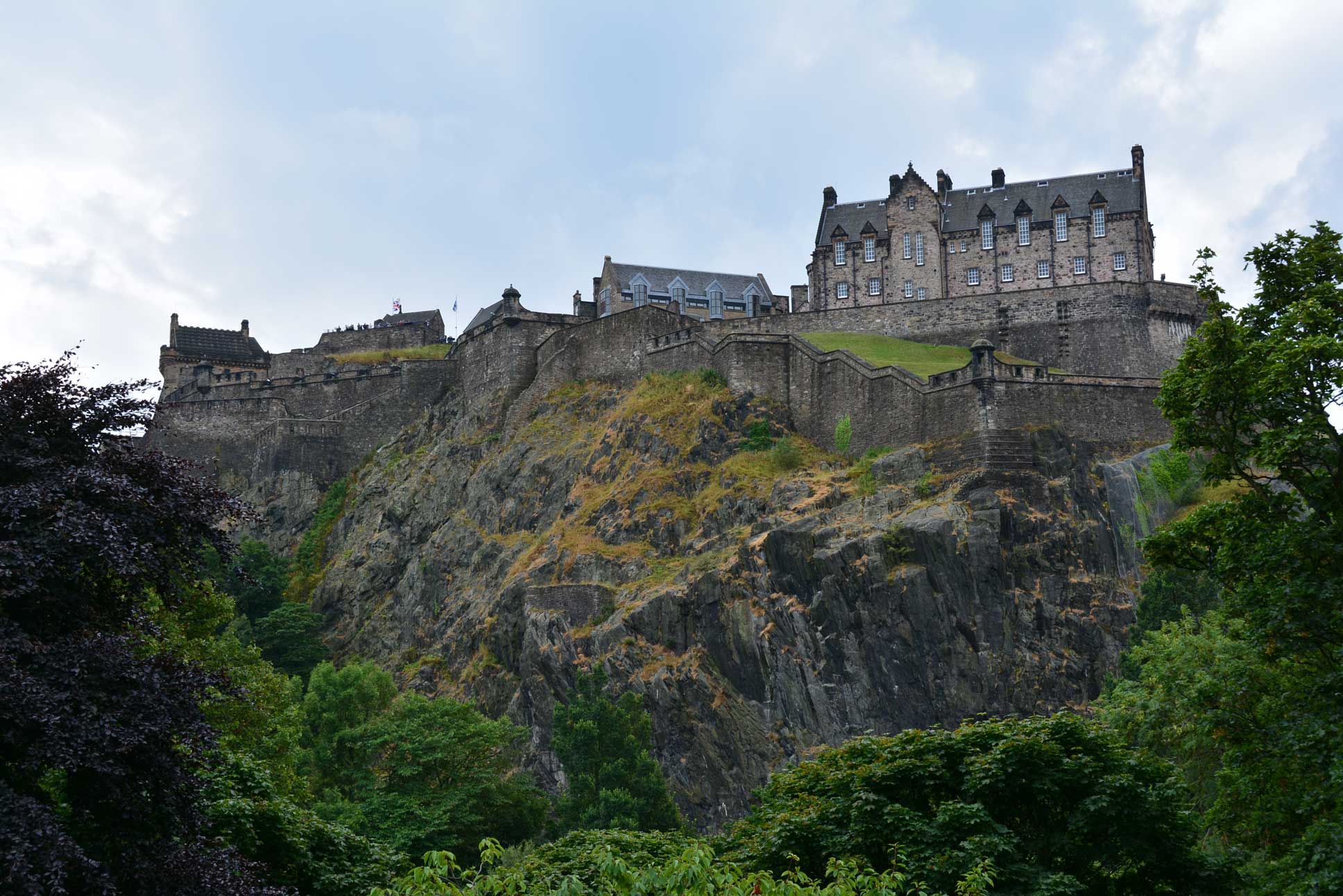 Approximately two centuries later in March 1296, King Edward I of England attacked Scotland, thereby sparking the Scottish Wars of Independence. He marched on Edinburgh and laid siege to the castle unleashing bombardment from his trebuchets for three days. Ultimately, the castle was surrendered to the English and remained under their control for nearly two decades until 1313 when Sir Thomas Randolph, 1st Earl of Moray, and 30 of his men scaled the volcanic rock and castle walls during nighttime hours to recapture it. Robert the Bruce then ordered destruction of Edinburgh Castle to prevent the English from attempting to retake it. As a result, the castle was razed to the ground with the exception of St. Margaret’s Chapel. Approximately half a century later in 1367, King David II, rebuilt the castle, which included a 100 foot tower house known as David’s Tower that was completed in the 1380s, years after his death at the castle in 1371.

The most infamous event at Edinburgh Castle known as the “Black Dinner,” occurred in November 1440. The reigning King of Scotland, James II was only 10 years old during this turbulent time in Scotland when various clans positioned for power. The Douglas Clan represented one such family and rivaled James. Sir William Crichton who served as keeper of Edinburgh Castle summoned 16-year-old William Douglas, 6th Earl of Douglas and his younger brother David to the castle for dinner. During dinner in David’s Tower, the severed head of a black bull was served on a tray. This event signaled the guards to drag the Earl of Douglas, as well as his brother to the courtyard where they were beheaded. James II was known for his passion of weapons, especially bombards and cannons. He was responsible for most of the cannons located at Edinburgh Castle today including the famous Mons Meg given to him as a wedding present from the Duke of Burgundy. Ironically, James died in 1460 during a siege of Roxburgh Castle when he was standing next to a cannon known as “the lion” that exploded at time of firing.

During the reign of James IV, the Great Hall was constructed at Edinburgh Castle. It was completed in 1511 just a couple of years before James IV was killed at the Battle of Flodden Field in September 1513. His young son, James V, was brought to Edinburgh Castle for his own safety in 1518 at the tender age of only five years old. Nearly a quarter of a century later, he died at the Battle of Solway Moss in November 1542, leaving his only child Mary as Queen of Scotland at just six days old. King Henry VIII of England attempted to join England and Scotland by having his son Edward wed Mary Stuart, thereby uniting Tudor and Stuart families in marriage. Following refusal of proposed marriage by Scottish regents, Henry began what would later be called the “Rough Wooing” in 1544. He commanded his army to burn Edinburgh to the ground in an effort to force Mary to marry his son. The city burned but the castle withstood damage and Mary was sent to France at the age of five where she later married the future King of France, Francis II.

In 1560, King Francis II of France died and Mary returned to Scotland still serving as Queen of Scots. By this time, her cousin Elizabeth was ruling as Queen of England. To bolster her claim to the English throne, Mary married a cousin named Henry Stuart, Lord Darnley. Both Mary and Darnley were grandchildren of Margaret Tudor, sister of Henry VIII of England. Mary gave birth to a son, future King James VI, at Edinburgh Castle in June 1566. Her marriage to Darnley was deteriorating as he insisted on attaining kingship status despite existing heir to the throne, namely, her son, James. Darnley was murdered nine months later outside Kirk o’ Field where he was found smothered after an explosion. Mary’s supposed lover, James Hepburn, 4th Earl of Bothwell, was suspected of the murder but later acquitted. A few months later Mary married Bothwell that heightened suspicion of his potential role regarding Darnley’s murder. Following an uprising against Mary and Bothwell, she was imprisoned at Loch Leven Castle. In July 1567, Mary was forced to abdicate the thrown to her one-year-old son, King James VI.

In 1573, Edinburgh Castle was attacked by Sir William Drury who led 1,000 English Troops with 27 cannons. They bombarded the castle with over 3,000 shots which destroyed David’s Tower, in addition to Constable’s Tower. In 1574, William MacDowall constructed a semicircular shaped cannon battery known as the “Half Moon Battery” on the remains of David’s Tower. During the 18th century, several new buildings were constructed within the castle including those for storing gunpowder to keep it dry (i.e., powder magazines), Governor’s House and new barracks to defend against potential threats, which were abundant due to various conflicts over time such as the Seven Year’s War (1756-1763), American War of Independence (1775-1783) and Napoleonic Wars (1803-1815). Additionally, portions of the castle were utilized to imprison soldiers during periods of conflict.

In April 1916 during World War I, the city of Edinburgh was attacked via air raid when two German Zeppelin’s dropped 24 bombs on the city. While many buildings were destroyed or damaged, the castle was unharmed. Today, Edinburgh Castle predominantly resides under the care of Historic Scotland. However, the Scottish Army manages some areas of the castle including new barracks block and military museums.

Edinburgh Castle still stands proudly in the city of Edinburgh and primarily serves as Scotland’s most popular tourist attraction with more than 1.5 million visitors annually. Similar to its counterpart in London, Tower of London, the castle once served as a military barracks, in addition to prison and houses the Honours of Scotland (i.e., Scottish crown, scepter, sword of state) and Stone of Scone upon which Scottish monarchs were traditionally crowned.

With the exception of Sundays, Good Friday and Christmas, the One o’clock Gun is fired from the Mill’s Mount Battery as a time signal for passing ships in the harbor, a tradition dating back to 1861. The One o’clock Gun has only ever been fired one time in self-defense, in an unsuccessful attempt to hit Zeppelins in the 1916 air raid. The most impressive portion of the castle is undoubtedly the Great Hall, which houses weapons and suits of armor from various periods of Scottish history. Its decorative stone corbels that support the Great Hall’s roof resemble a French Renaissance appearance similar to Blois in France. Furthermore, the structure exists as one of only two medieval halls in Scotland with an original hammerbeam roof.

Each August, the Royal Edinburgh Military Tattoo music festival is held on the Esplanade leading into the castle, a parade of massed pipes and drums of Scottish regiments climaxing with a lone piper on the castle battlements playing a pibroch in memory of deceased comrades-in-arms followed by massed bands playing traditional Scottish tunes. Edinburgh Castle can take a full day to visit. Nearby parking is limited given its location in the center of a modern city. Public transportation via park and ride locations around the city and buses afford a viable alternative as they typically stop very close to the castle.

In the Center of Edinburgh at the end of the Royal Mile.