The first Conisbrough Castle was likely a wooden motte and bailey style architecture built around 1070 following the Norman Conquest of England in 1066. It was constructed by William de Warenne, first Earl de Warenne and son-in-law of King William I. He served as one of the king’s original followers from Normandy in 1066. Little is known about the original wooden castle. For a few generations, the castle passed down to male offspring via inheritance until 1147 when 3rd Earl de Warenne died without a male heir. He passed the castle to his daughter Isabel who married William de Blois, son of King Stephen, who became the 4th Earl de Warenne. William died in 1159 and Isabel remarried a few years later in 1163 to Hamelin Plantagenet who became the 5th Earl de Warenne. 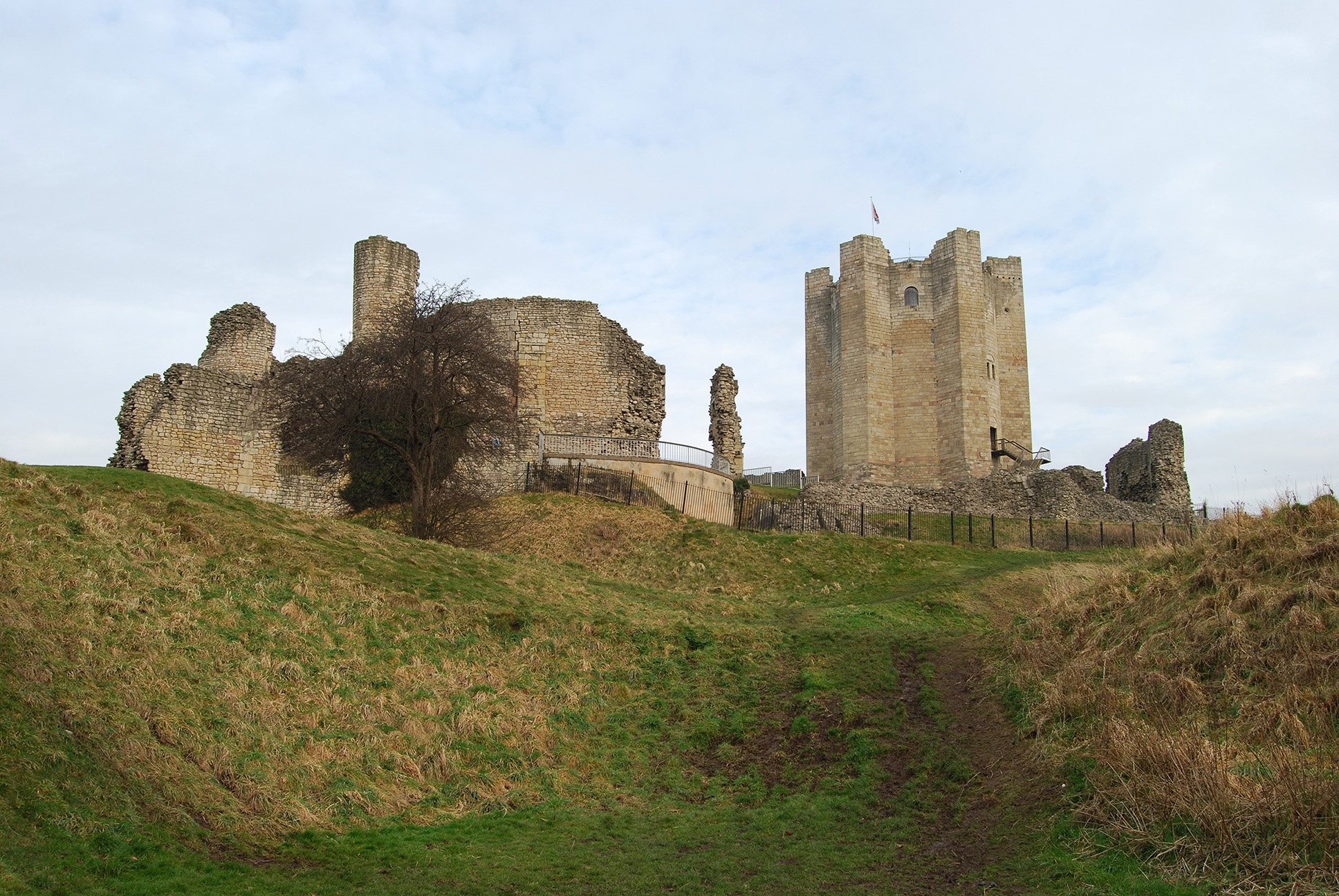 The stone Conisbrough Castle we enjoy today was built around 1180 by Hamelin Plantagenet, illegitimate half-brother of King Henry II. The castle resides on same site as original wooden castle in order to provide a wide and deep dry moat ditch surrounding the castle. In 1201, royalty was hosted at Conisbrough Castle when King John, nephew to Hamelin, stayed there. Similar to other castles of the middle ages, Conisbrough Castle was besieged and captured. This occurred in 1317 by Thomas, Earl of Lancaster. Five years later, Thomas rebelled against Edward II and was ultimately defeated and executed. Thereafter, ownership of the castle reverted to 8th and last Earl de Warenne, John in 1326. Following his death in 1347, Conisbrough Castle returned to the Crown. It was given by Edward III to his fourth son, Edmund Langley, later Duke of York, who was once John de Warenne’s godson. In the 14th century, major changes were made to domestic buildings within the castle by the Dukes of York. During the Wars of the Roses, Richard, 3rd Duke of York, became leader of the Yorkist cause and claimant to the throne against the regime of Lancastrian King, Henry VI. In 1460, Richard was declared a traitor to the Crown and his lands were seized with exception of Conisbrough Castle, which was garrisoned for him. Later that same year, Richard was killed at the Battle of Wakefield. His head with crown of paper and straw was impaled on a spike and displayed over Micklegate Bar in York. Three months later, his 18-year-old son, Edward, would defeat the Lancastrian army at the Battle of Towton and become King Edward IV from House of York.

By late 15th century, the castle was abandoned and left to deteriorate. While conducting a survey for King Henry VIII in 1538, it was noted the keep at Conisbrough lost its roof and floors. The gatehouse and part of the south curtain wall also collapsed into a ditch. Within 18th and 19th centuries, landscaping was performed around the castle in an effort to enhance its picturesque qualities. Sir Walter Scott saw Conisbrough Castle on his way north and thought it represented an Anglo-Saxon ruin, thus recreating it as Coningsburgh Castle in his novel entitled Ivanhoe. Most recent work occurred during the 1990s when keep received a new roof and its floors repaired by Ivanhoe Trust. In 2007, direct management of the castle was transferred to English Heritage.

The most prominent feature of Conisbrough Castle is undoubtedly the splendid and unique cylindrical keep, which includes massive buttresses protruding around it for stability. The keep stands over 90 feet high with walls over 15 feet thick. This is a unique design, at least in England anyway, as there is a similar keep in Mortemer, France, also believed to have been built by Hamelin Plantagenet. Parts of the gatehouse and south curtain wall still stand with other parts still visible in nearby ditch following collapse of the walls sometime before 1538. Foundations along north curtain wall still outline where the great hall, kitchen and garderobe once stood. Conisbrough Castle is well worth a visit but will only take a few hours to explore. If you wish to visit a second castle, Pontefract Castle is an easy drive north to supplement the day.