The Royal Fortress of Chinon includes a rich history, which served a major role regarding the futures of both France and England during the middle ages. While a Roman fortification existed on the site dating back to the 5th century, the first castle within Chinon was constructed during the 10th century by the Count of Blois, Theobald I. 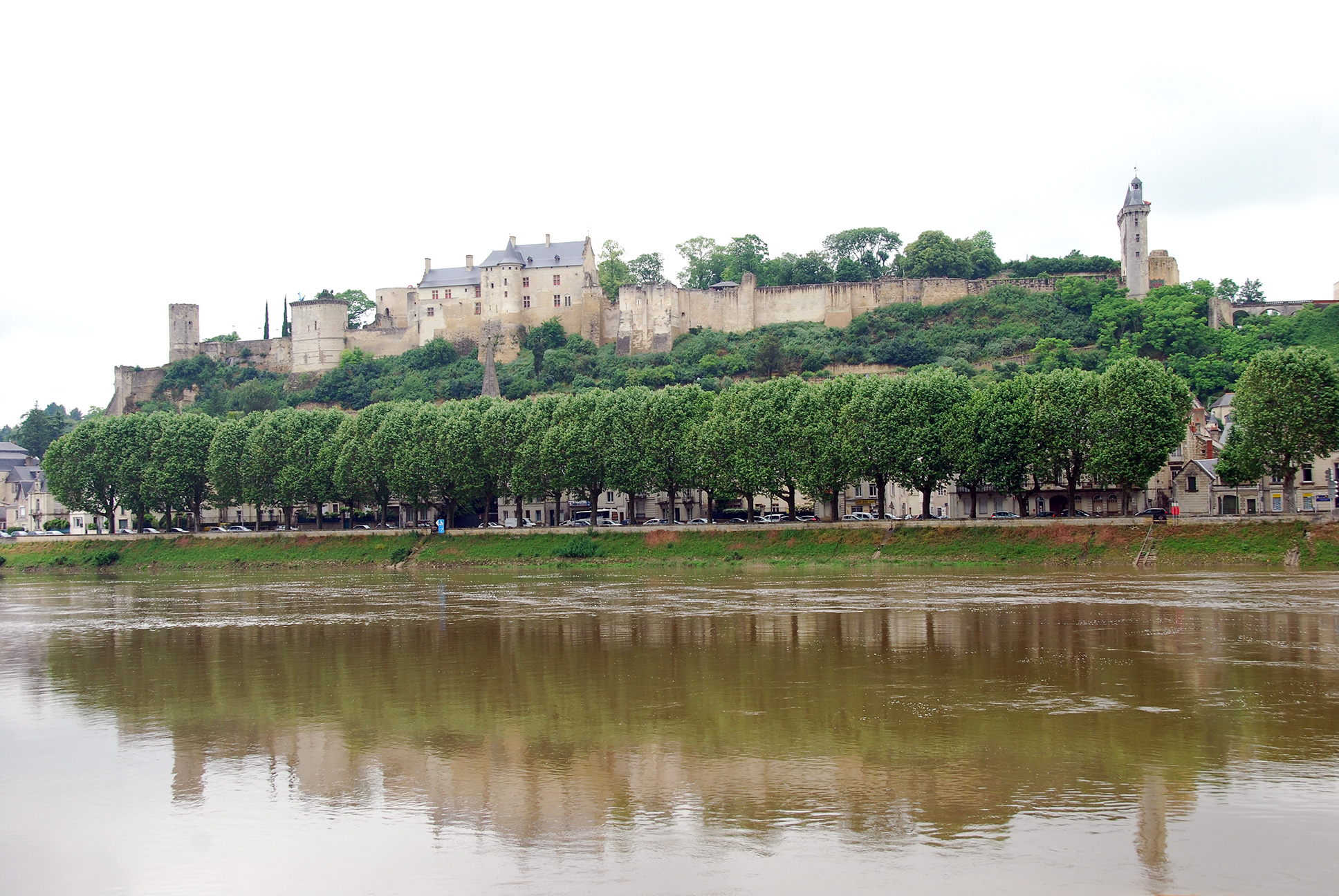 In 1044, the Counts of Anjou took control of Chinon as they expanded their domain into Touraine. Subsequently, the fortress became one of their primary residences. In 1154, Henry II inherited claim to the crown of England from his mother. While ruling England and parts of France, he commissioned extensive building efforts at Chinon including construction of Fort Saint George, which served as the location for his administration and government related functions. Nearly two decades later in 1172, a conflict between Henry and his sons reached a crossroads after they conspired with their mother, Eleanor of Aquitaine, against him. Betrayal by his sons affected him until his death. Henry imprisoned his wife at Chinon before sending her to England under house arrest for nearly 15 years.

Following the death of Henry II in 1189 at the fortress, his lands including Chinon and titles passed to his son Richard I, the Lionheart who reigned over the Plantagenet Empire. In 1191, Richard formed an alliance with the King of France, Philippe Auguste, during the Crusades. However, Richard was imprisoned upon his return from the Crusades by the Emperor of Germany. Taking advantage of his absence, Philippe attacked Normandy, Maine, Poitou and Anjou. Making matters worse, Richard's brother, John, betrayed him by also entering an alliance with the King of France during his imprisonment. Richard was eventually freed from prison after a considerable ransom was paid for his release.

In 1199, Richard the Lionheart was wounded during the siege of Chalus in Limousin, France when an arrow pierced his neck. The wound later became infected and Richard died without an heir. Consequently, ownership of Chinon reverted to his brother John who served as King John of England and Count of Anjou. From 1200 to 1202, John made various improvements to the Fortress of Chinon. In 1200, he chose Chinon to celebrate his marriage to Isabella of Angouleme, cousin to the King of France, whom he took from suitor Hugh de Lusignan. This marriage was the pretext for Philippe returning to a state of war with John. In June 1205, Chinon was retaken by Philippe while John was away in England. John returned to Chinon in 1214 to sign a truce with Philippe.

Approximately a century later, Chinon was utilized to imprison dignitaries of the Order of the Temple in 1308. Another period of notable historic significance occurred at Chinon began in 1419 when the King of France, Charles VI, disinherited his son, Dauphin Charles. Thereafter, Charles VII withdrew to Bourges, as well as lands south of the Loire where the Fortress of Chinon served as one of his residences. In 1427, Charles enacted his court at Chinon. A couple years later in 1429, Joan of Arc visited him at Chinon. The Coudray Tower served as her place for lodging. Additional fortification work was incorporated at Chinon in 1560 during the French Wars of Religion. Thereafter, it eventually fell into disrepair until restoration undertakings began approximately three centuries later in 1857. From 2003 through 2010, revitalization endeavors including restoration of the Royal Quarters were completed.

The Royal Fortress of Chinon consists of three castles: Fort Coudray, Middle Castle, and Fort Saint George. Best views may be attained from across the River Vienne.

The Royal Quarters located in the Middle Castle represent the most impressive portion of Chinon. These rooms were occupied by Plantagenet kings and visited by Joan of Arc. Prior to 2003, the Royal Quarters lacked a roof and consisted solely of walls. Following extensive repairs, the Royal Quarters was restored with rooms full of interactive displays and audio/video features narrating history of the castle, as well as story regarding Joan of Arc.

Several towers reside across the courtyard in the Middle Castle from the Royal Quarters. The Argenton Tower was constructed during the late 15th century. It enabled more robust defenses including five meter thick walls and embrasures for cannons to oppose new gunpowder weapons of the time. The Clock Tower, which dates back to the 14th century, represents the most impressive tower of the castle. It serves as the entrance to the Middle Castle, over a drawbridge and through a portcullis. Its tall, slender shape makes it unlike other rounded towers popular in most castles. The five levels of the tower are accessible via decorative spiral staircase.

Within the Fort Coudray portion of Chinon, resides Coudray Tower. It was built by Philippe Auguste after he captured the fortress from King John in 1205. Its name may have originated from the grove of hazelnut trees existing within the fort, “Coudres” in old French. More than a century earlier, it was used to imprison dignitaries of the Order of the Temple in 1308. From a touring perspective, the Royal Fortress of Chinon can easily take a half day or more to visit. However, the Château de Langeais is located within close proximity should you have additional time.

Sign posted off the D571 in Chinon. Parking two blocks from the castle off the same road.