Carew Castle resides in the wild and rugged lands of Pembrokeshire, located in Southwest Wales. The structure began as an earthwork castle in the early 12th century with addition of stone walls and towers later during the same century. Carew Castle underwent several Tudor style architectural changes during the 16th century. One such modification entailed the addition of large rows of mullioned windows on the north front facing the mill pond.

Besieged and battered during the English Civil War, Carew Castle was severely damaged and subsequently left to slowly pass into a romantic ruin. However, the castle still serves as home to a large population of bats, as well as a few ghostly spirits. 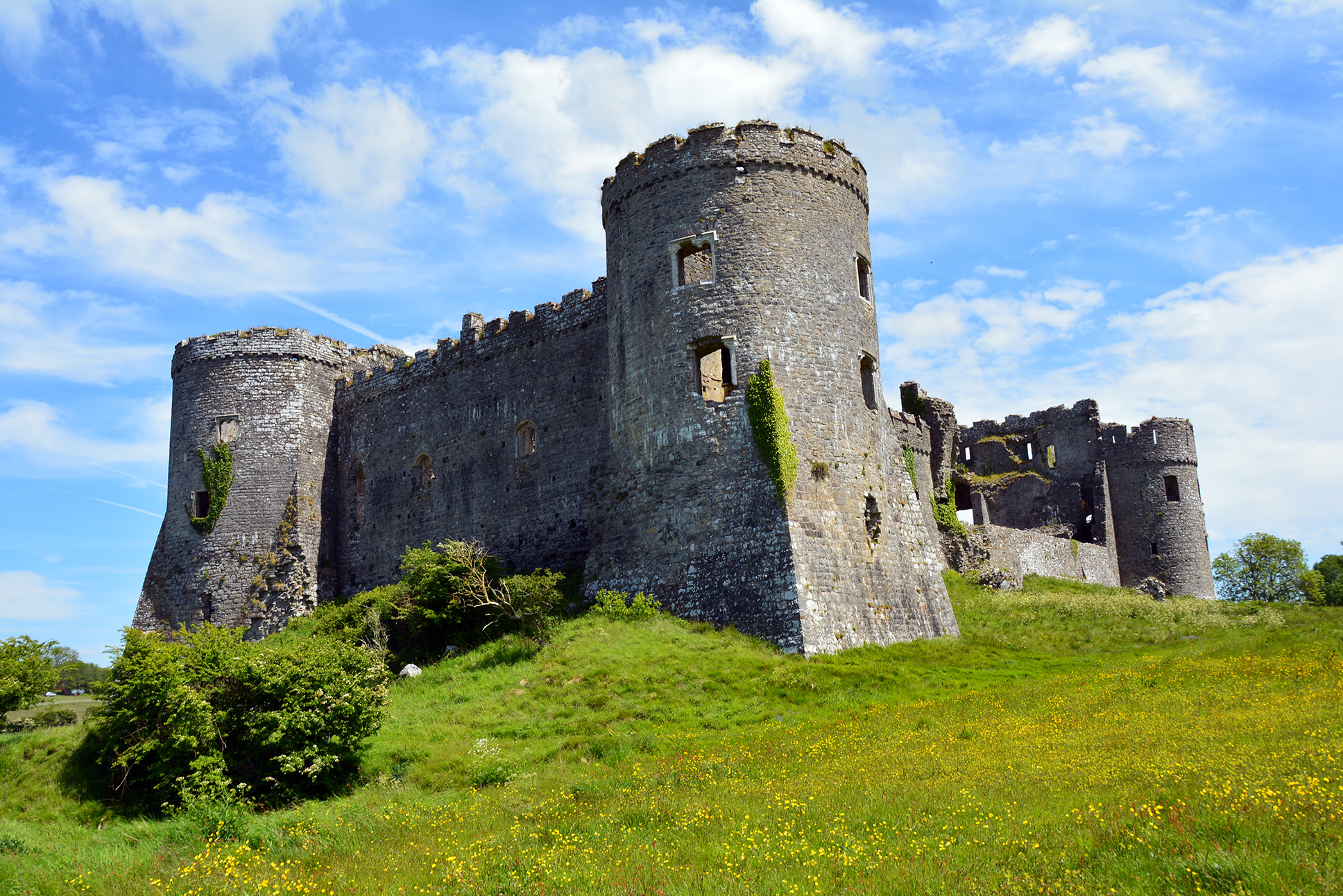 In 1100, Gerald of Windsor married the beautiful Princess Nest and built the first castle on this site, which he had acquired as part of his wife’s dowry. Nest was the greatest beauty of her age, and was nicknamed "the Helen of Wales". By the time of her marriage, she had already acquired a royal lover in the robust shape of Prince Henry, later to become King Henry I, by whom she had the first of her many offspring. She had five legitimate children with Gerald before, nine years into their marriage, Owain ap Cadwgan, a Prince of Ceredigion and also Nest’s distant cousin, became enraptured by her beauty and stormed the castle, determined to carry her off. Tradition holds that Nest heard her would-be kidnapper banging on the bedroom door, she urged her husband to escape down the toilet shaft, and then allowed herself to be carried away to her cousin’s Ceredigion love nest.

Following the intervention of King Henry I, who threatened Owain with terrible reprisals, Nest eventually returned to Carew Castle, though not before she had borne Owain two children. A few years later, Gerald avenged his degradation by killing Owain in an ambush.

When Gerald died in 1116, Nest married Stephen, castellan of Cardigan, by whom she had several more children. Following Nest’s death, her spirit remained earthbound as a "White Lady", whose shimmering form would drift through the corridors, passageways, and stairwells of the subsequent castles that sprang up on the site of Carew Castle.

In the 17th century, the reclusive Sir Roland Rhys took up the tenancy of the castle and secreted himself away in the Northwest Tower, where his favorite companion was a pet ape, brought from the Barbary Coast of Africa. One day, his son eloped with the daughter of a local Flemish merchant named Horowitz. The girl’s father was livid and turned up at the castle to confront Sir Roland. Following a heated exchange, Sir Roland set his ape upon the outraged man. The beast administered a savage mauling, from which the wretched Horowitz only just managed to escape. As he fled, he cursed Sir Roland and wished the same fate upon him. That night, the stillness of the early hours was shattered by terrible screams sounding from the tower. The servants rushed to investigate and found their master lying dead in a pool of blood, his throat ripped open, and his corpse surrounded by blood-spattered furniture and torn tapestries. The ape, which has evidently turned against his owner in fulfillment of Horowitz’s curse, also lay dead. But on certain evenings the ape’s ghost is said to mount the stairway and climb to the battlements of the Northwest Tower, from where it emits a loud howl that echoes through the night and rebounds around the ivy-clad walls of this intriguing and atmospheric monument.