As Richard Jones tells the story ...

“There is little today to suggest what a prosperous port Orford once was, save the ruins of its mighty castle built in 1165 by Henry II. It was to this imposing fortress that a group of agitated fishermen brought a most remarkable catch. Having spent a day trawling the waters off the Suffolk coast, they noticed that their nets were unusually heavy, and they discovered a strange creature caught up amongst the fish.

It resembled a man, but its naked body was covered with hair; it had a long, shaggy beard and a bald crown atop its head. Over the days that followed, the castle governor, Bartholomew de Granville, attempted to communicate with his strange prisoner, but to no avail. Apart from a few grunts, the Wild Man of Orford, as he became known, would say nothing. They fed him a diet of raw fish from which he would always wring out the moisture before eating. They even took him to a service at Orford Church, and were perturbed to discover the sacraments meant nothing to him. However, he seemed relatively happy at the castle and did not attempt to escape, even when he was taken out to sea for a swim. After a few months he began to grow restless. One day, when his guardians took him for his customary swim, he slipped beneath the surface and was never seen again.” 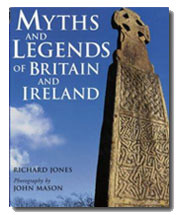 This story was taken from the book "Myths and Legends of Britain and Ireland" by Richard Jones. We would like to thank Richard for graciously allowing us to use his text on Great Castles for some of the stories presented on this site. You can find other stories by Mr. Jones on his web site, Haunted Britain.